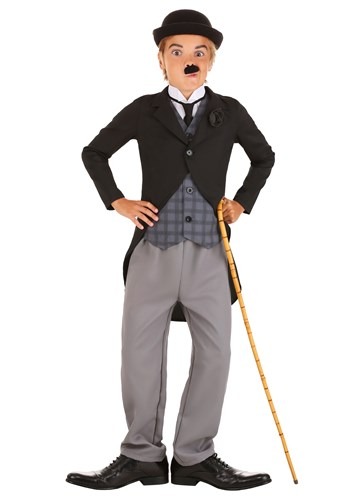 Today, comedy is all about memes and weird animal gifs. But back in the day, comedy used to be about a bumbling guy with a funny mustache and clothes that didn't quite fit him. Yes, of course, we're talking about Charlie Chaplin! His character, The Tramp, appeared in tons of movies, spreading the laughs to kids and adults. He was sort of like... the Adam Sandler of his time.

If your child wants to take part in comedy history, then perhaps it's time to get into some of the slapstick humor of the iconic movie character. With this Boy's Charlie Chaplin Costume, your child can look just like The Tramp from the movies to bring a classic sense of humor to the world!

Our costume designers wanted to get the look of Charlie Chaplin just right! That's why they spent plenty of time watching old black and white movies to create this outfit. The costume comes with everything your child needs to transform into the character. It starts with a black jacket with a single button front, along with a gray vest to go underneath. The shirt front has an attached tie, so your child doesn't need to tie their own tie to dress up as Charlie! The pants are gray and fit with an elastic band in the waist. Finally, the bowler hat and faux mustache really bring the whole look together! The faux mustache fits with adhesive tape, but we recommend adding some spirit gum to your order if you want to use it multiple times.

If your child is a student of comedy, then they're going to want to start with the roots of comedy in film! This Charlie Chaplin Costume for kids will help any child transform into the classic comedy character, The Tramp!