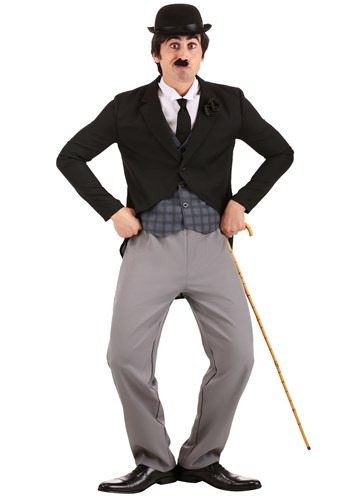 In the early days of movies, comedy was an unrefined art. There were a few films that dabbled in comedy, but it wasn't until Charlie Chaplin rose to stardom that comedy movies really found their footing! Of course, his most famous role was "The Tramp," a down on his luck everyman who seemed to face larger and larger troubles with each new movie! Characterized by his ill-fitting suit, a derby hat, and a goofy mustache, Charlie's character become one of the most recognized figures during his time!

Our costume designers wanted to pay homage to the classic comedy character, so the spent plenty of time watching old movies to prepare for this Men's Charlie Chaplin Costume! They've captured his signature look in great detail.

Inspired by the movie icon, this adult costume gives you everything you need to transform into Charlie Chaplin. The outfit starts with a black jacket that fits with a button in front. The vest has a grey, plaid pattern and has buttons down the front and the shirt front fits underneath the jacket and features an attached tie. The costume also comes with a pair of grey pants that feature an elastic waistband to provide a comfortable fit. The bowler fits on your head to give you a classic, 1920's look! To finish the whole look off, the costumes with a faux mustache to give you Charlie's signature facial hair. The mustache is made out of synthetic fibers and fits with adhesive, however, we recommend using some spirit gum (sold separately) for multiple uses! Put it all together and you'll have a look that comes straight from the 1920s!

Whether you're a fan of classic comedy or you just want to engage in some historic antics, this Men's Charlie Chaplin Costume will do a great job of transforming you into the comic character, The Tramp!