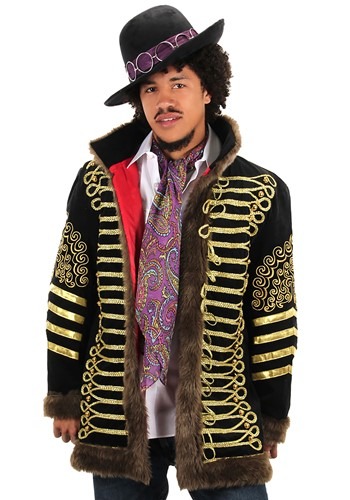 The Legend of Rock

Playing guitar is hard. Like, really hard. Trust us... it takes years of dedicated practice and a bit of innate talent to wow a crowd with your amazing guitar skills. We had a hard time just trying to learn "Smoke on the Water."  Jimi Hendrix makes it look super-easy, but that's because he's a true rock legend. If you plan on matching Jimi's talent, then it's time to head to the music shop to set yourself up with an electric guitar, but if you just want to incorporate the rock star's iconic fashion sense to your wardrobe, then all you need is this Jimi Hendrix jacket costume. The coat recreates the look of the Hussars military jacket that he often wore. It's a great start for any Jimi Hendrix costume.

Inspired by the greatest guitarist of all-time, this Men's Jimi Hendrix Deluxe Jacket Costume will have you looking gig-ready in no time. The black jacket has red lining, with plenty of gold detailing on the exterior. It also has a layer of faux fur material around the edge to help you stand out on stage. The coat has the aura of psychedelic bandleader from the 60s, so even if your guitar skills can't quite match Jimi's, you'll feel confident when you break into your first song!

The Legend of Style

Of course, this Hendrix jacket costume won't grant you the musical talent of a rock legend, but it might inspire you to put on a show of your own! We recommend pairing this costume up with a toy guitar accessory or one of our many hats. After all, Jimi wasn't just known for his amazing guitar skills—he was also known for his wild style sense. Then, it's all about planning the next Woodstock!