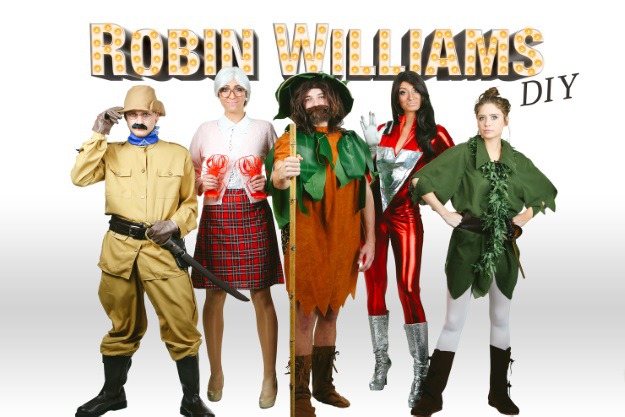 “Well sir, I don’t know how much value I have in this universe. But I do know I made a few people happier than they would’ve been without me; as long as I know that, I’m as rich as I’ll ever need to be.”

– Robin Williams as Mork, from Mork and Mindy

Robin Williams' passing in 2014 left the world a little less bright and a little less funny. Mr. Williams was one of those rare performers who could inspire rolling laughter and flowing tears in the same scene. It is now more than one year after his tragic passing and we still miss having him around. We have always been inspired by the amazing characters that Robin Williams has portrayed over his long and robust career. In honor of this colorful cast of characters, we would like to offer up this group costume idea in honor of one of the best funnymen around.

This is the character that rocketed Robin Williams into stardom! Williams first appeared as the alien Mork on Happy Days, and then in the titular role in Mork and Mindy. Robin Williams impressed producers with his unique brand of manic improv humor. Mork’s catchphrases ‘Na-Nu Na-Nu’ and ‘Shazbot’ quickly became part of popular culture. 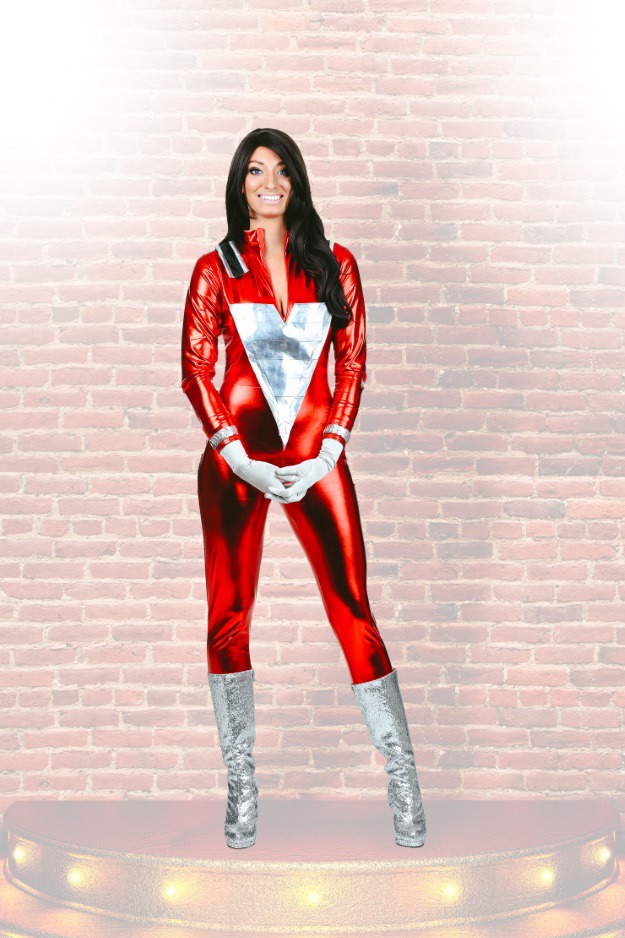 This costume is based on Mort’s flight suit—the brightly colored outfit he wore on his arrival on Earth. A bright red jumpsuit, silver boots and gloves, and a few shiny accessories, and you are on your way to the perfect Ork-ish space suit. You could also choose to go the route of his brightly colored, often striped, shirt and rainbow suspenders look. 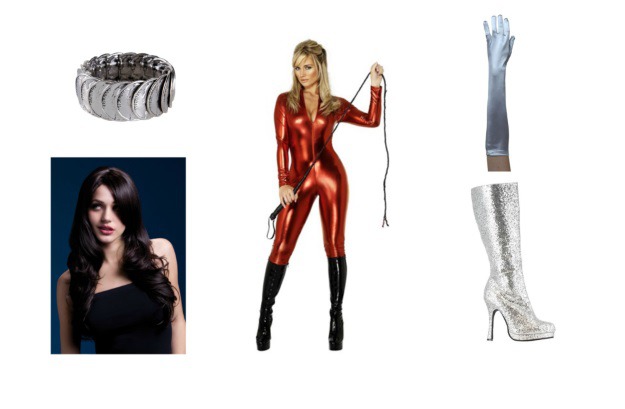 The accents on the costume required a little crafting on our part. We used one of our favorite crafting materials—duct tape! Rolls and strips of magazine paper were used as the base and duct tape provided the substance and coloring. We adhered the duct tape pieces to the jumpsuit using double-sided tape and safety pins.

This 1993 film told the story of a father who dresses as an elderly nanny in order to spend time with his kids while separated from his wife. Robin Williams played the titular role, and the makeup artists who transformed Williams into Mrs. Doubtfire won an academy award, because let's be honest, if you can turn Robin Williams into a woman you deserve some kind of award. 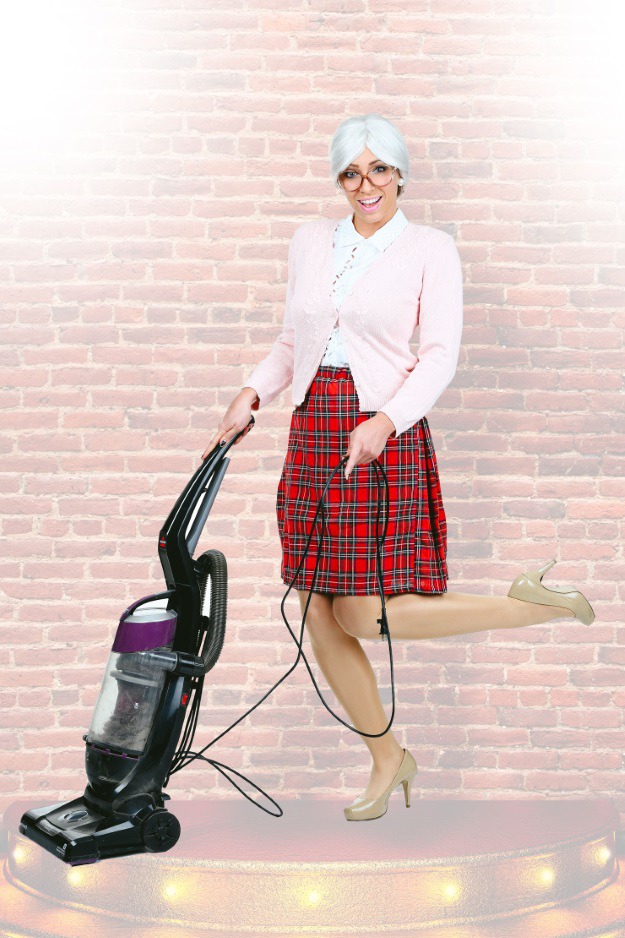 This character makes for a perfect member of your group costume, as the character can be played by a guy or a gal! Williams has a ton of wardrobe changes and interesting scenes (we remember a certain situation with burning latex in the kitchen) that you could choose from. Maybe even the merangue facial look?? One lump or two? 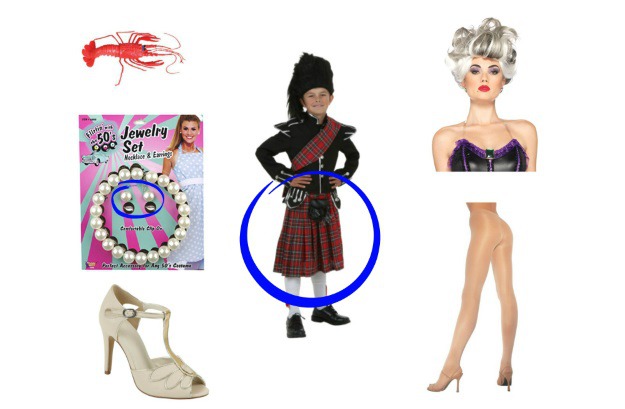 A matching blouse and sweater will complete your look; we found ours at a local thrift shop. Additional accessories can include some pot lids and lobster props, an apron, a soccer ball, or a vacuum. There are so many ridiculous situations in the movie, simply pick your favorite!

After being trapped in the mystical board game Jumanji for 26 years, Alan Parish is released looking like a wild-man. He traps a lion before running off to find his family. While he only wears this outfit for a few scenes, the look is iconic and would be an instantly recognizable addition to your group. 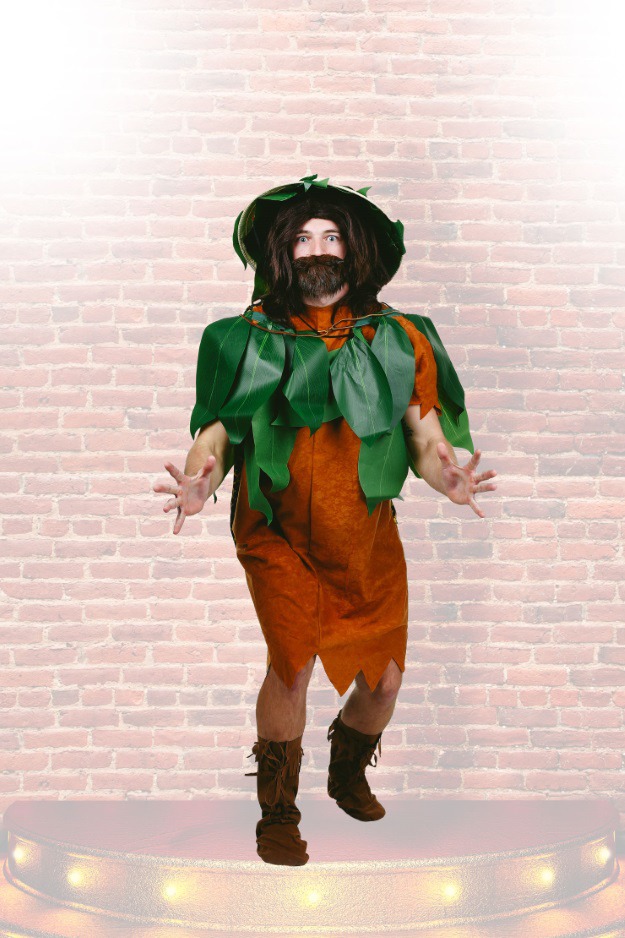 A simple tunic, some plastic banana leaves, and a sun hat will give you the clothes you need. Our various beard/long hair combos are one option for getting the facial hair right—but a real die-hard DIY’er could just let their razor get some rest, and grow the majestic beard needed to pull this costume together. 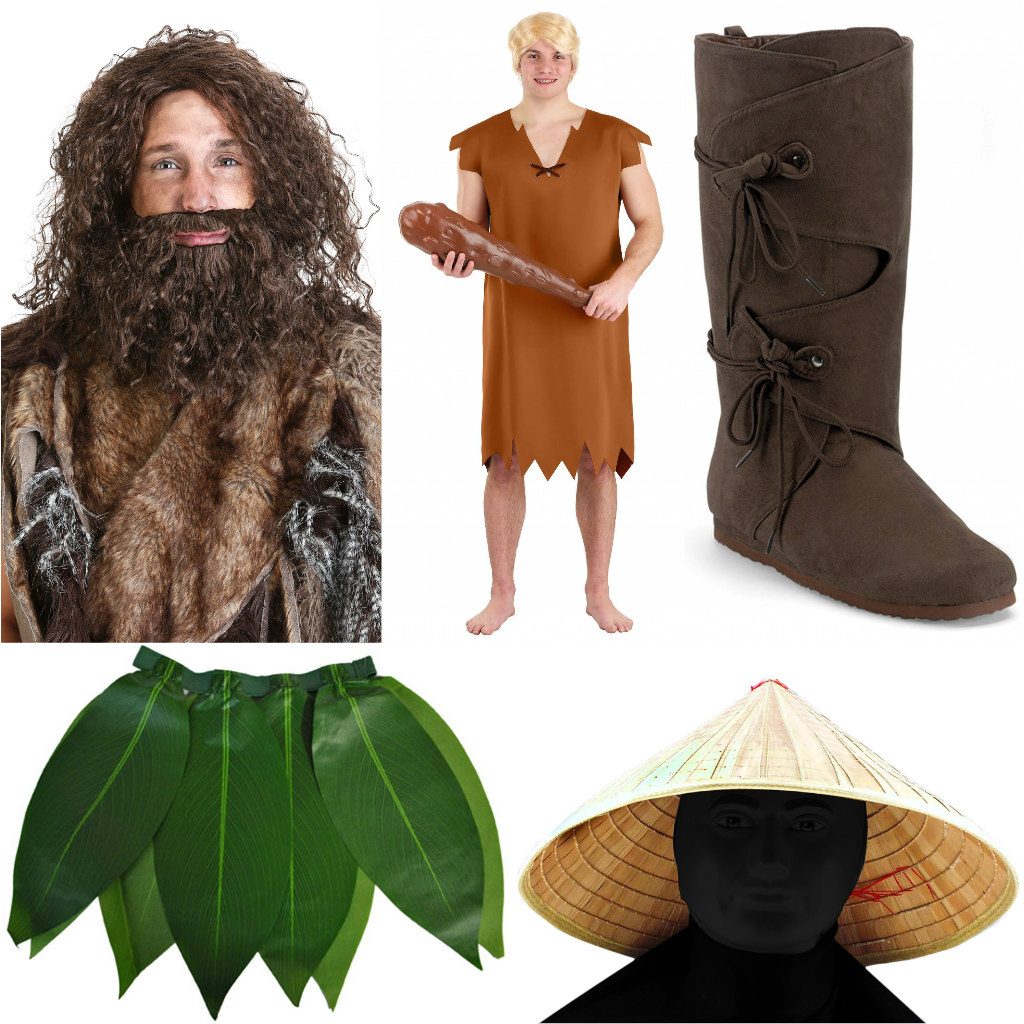 Some leather cord from the local craft store adds a bit of flair to the costume. We also picked apart a few of our leaf skirts and used them as shoulder pieces, as well as glued them to the hat. Feel free to experiment with any sort of leaf-like accessory. In fact, if you happen to live near or in a jungle this costume will be exceedingly easy to make. Just remember - in the jungle you must wait, until the dice read 5 or 8.

Hook tells the story of a Peter Pan all grown up, with Robin Williams playing the now-adult Peter. He loses his imagination along with his ability after spending too much time in the "real world." After finding his teddy bear, and his happy thought, he regains his ability to fly and saves the day, and his children. 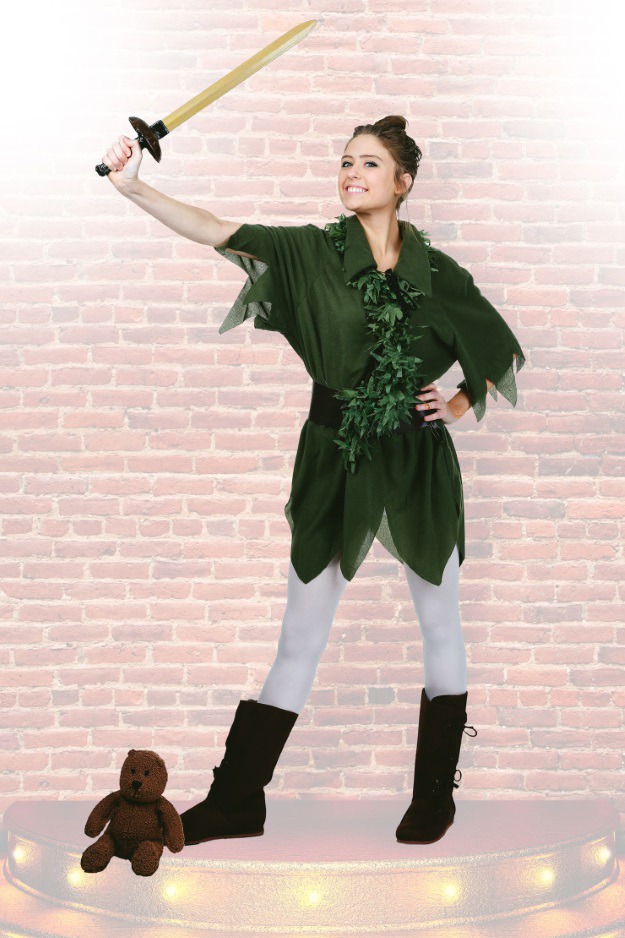 Pan is another great choice for a gender-swapped costume—as Pan can easily be a woman. We used a classic Peter Pan costume with some additions to complete the look. If you really want to go all out, a golden-bladed, coconut hand guard sword will really tie the piece together. Fair warning, be sure to find your happy thought and a healthy amount of fairy dust before attempting flight (seriously though, you probably can’t fly so don’t try!). 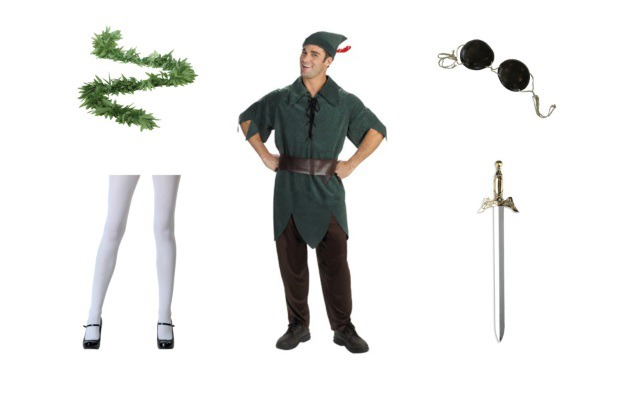 We created a version of Pan’s Sword by combining our Knight’s Sword Accessory with some gold paint and one half of a coconut bra. Remove the outer portions of the handguard on the sword and cut a slit through the coconut (easier said than done). Slide the sword through the slit and paint it gold, and you’ve got yourself a sword fit for Pan. We used power tools, so if you plan on using power tools be sure you know what you’re doing—or else you might be better off being Captain Hook for Halloween.

DIY Theodore Roosevelt Costume From Night at the Museum 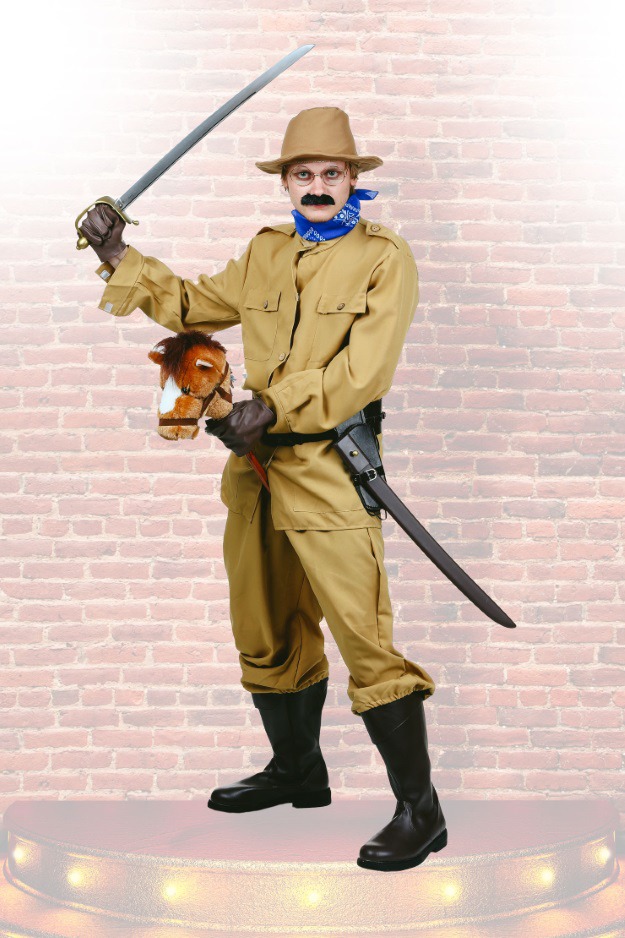 A complete Roosevelt costume as the base is probably best here- unless you happen to have Spanish-American War fatigues laying around. We added on a couple of key accessories to really drive the costume home. Mustache and horst prop are both must-haves. 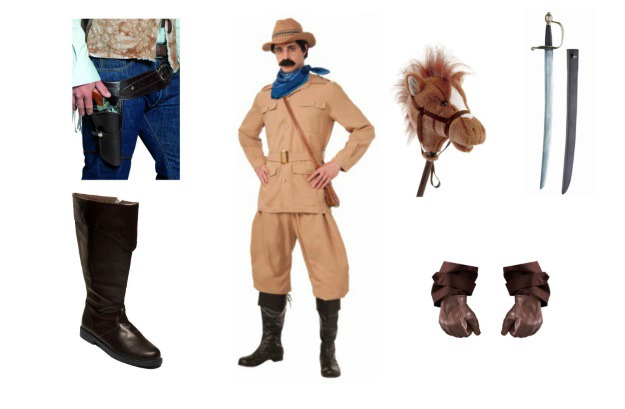 This costume is all about the accessories. A basic tan fatigue outfit is easy enough to find, however, the sword, glasses, play horse, leather belt, and boots really drive the look home. If you happen to have a real horse available that would REALLY bring it home (by it, we mean you, as a real horse could actually get you home).

We only covered a few of the characters that Robin Williams portrayed in his career. There are many more, both serious and comical, that you could bring as companions to the costume ideas above. The Genie from Aladdin, Popeye, the professor from Flubber, Patch Adams, what a career! Character imagery is included below for reference, as well as links to a few key costume pieces that would help create each look. 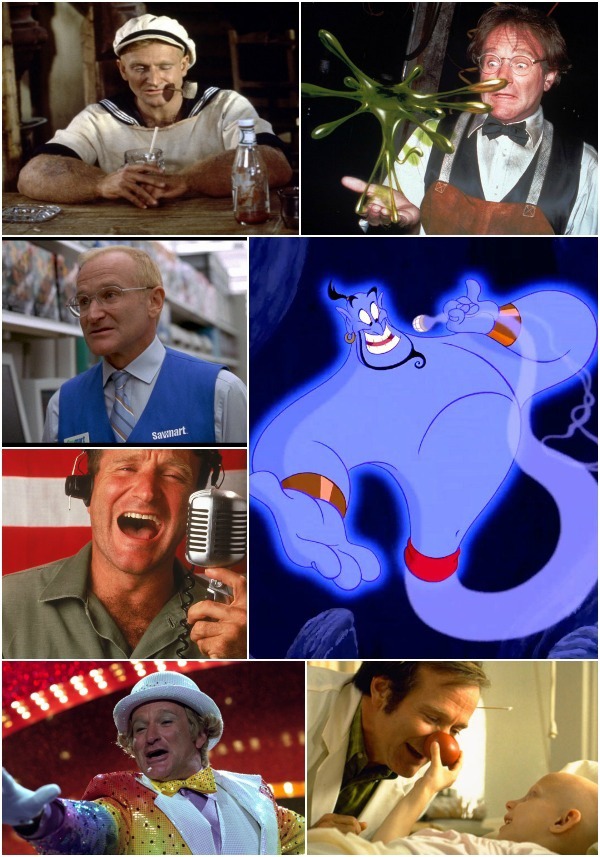 Whatever character you choose, and whichever costumes make up your tribute group, this idea is sure to be a hit. We hope that Mr. Williams would be proud to see so many people having fun dressed as these memorable characters. What was your favorite Robin Williams role? Which do you think would make the best costume? Let us know in the comments below. Carpe Diem, friends.