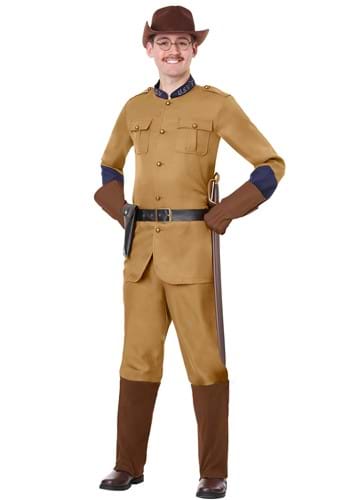 Does not come with Big Stick

Teddy Roosevelt is the least presidential o all the presidents. In our opinion, that's one of his best qualities. He wasn't stuck up, in fact, he was always getting into all sorts of scrapes even after he was voted into office. He went blind in one eye after a boxing incident in the White House. Did he stop fighting in the White House after that happened? Not really, he just switched to jiu-jitsu. Teddy didn't hesitate to become the first president to travel the continental US, braving the treacherous wilderness of the wild west despite the worries of the politicians back in Washington. Actually, he took it further, while he was on the west coast on a speaking tour he snuck off with John Muir to go camping and explore the natural wonders of the Rockies and Yellowstone. This rebellious backpacking trip inspired him to make these national wonders into national parks. Also, we're pretty sure that's where he got that big stick that he mentioned in that famous quote of his.

When we designed this Made-By-Us costume we wanted to represent the other side of US presidential history. This costume is both dignified as well as exploration ready. The suit has a khaki color and an early nineteen-hundreds cut. The brass buttons, jaunty brimmed hat, and collar embroidery add to the presidential flair while the holsters on the belt make you look rough and ready.

Whether you're choosing a look for Presidents Day or you want a historic look for Halloween, you'll love this dashing costume. You might find yourself longing to explore the wilderness and take on both politicians and moose with your bare hands but that's just a part of transforming into one of the wildest presidents of the US. Do like Teddy would do and take it in stride!