These WWE Costumes Will Get You Ready to Rumble [Costume Guide] 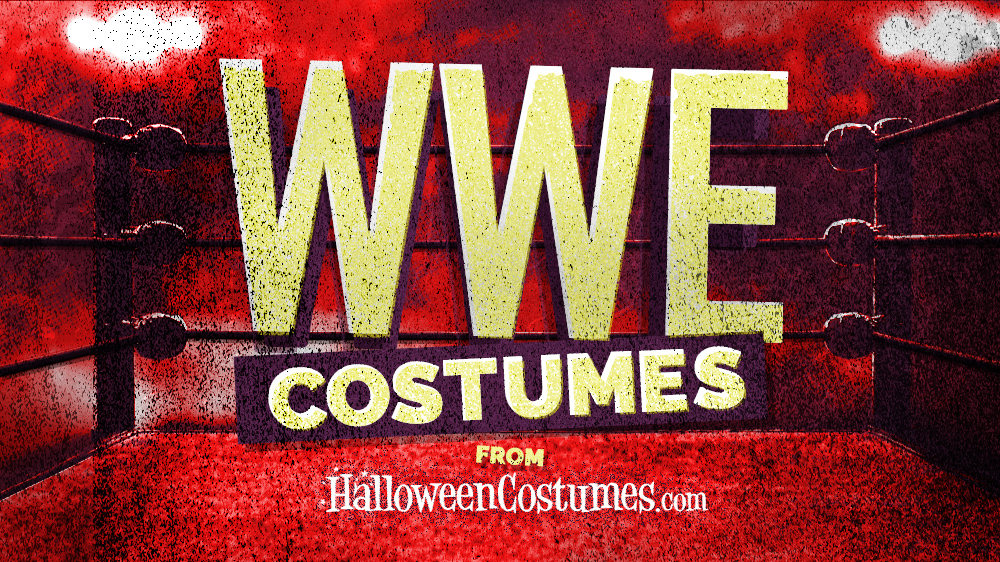 Think you’re ready to step into the ring with some of the greatest wrestlers ever? No? Well, that’s ok because you can just dress like them in these officially licensed WWE Superstar costumes from HalloweenCostumes.com. You can be the world heavyweight champion of Halloween by dressing in the attire of these Hall of Fame wrestlers. WWE costumes are a great group costume idea that can lead to some fun conversation. You can all even play your own intro music and work on your trash-talking skills. However, remember that you only look the part, so leave the wrestling moves to the trained professionals. 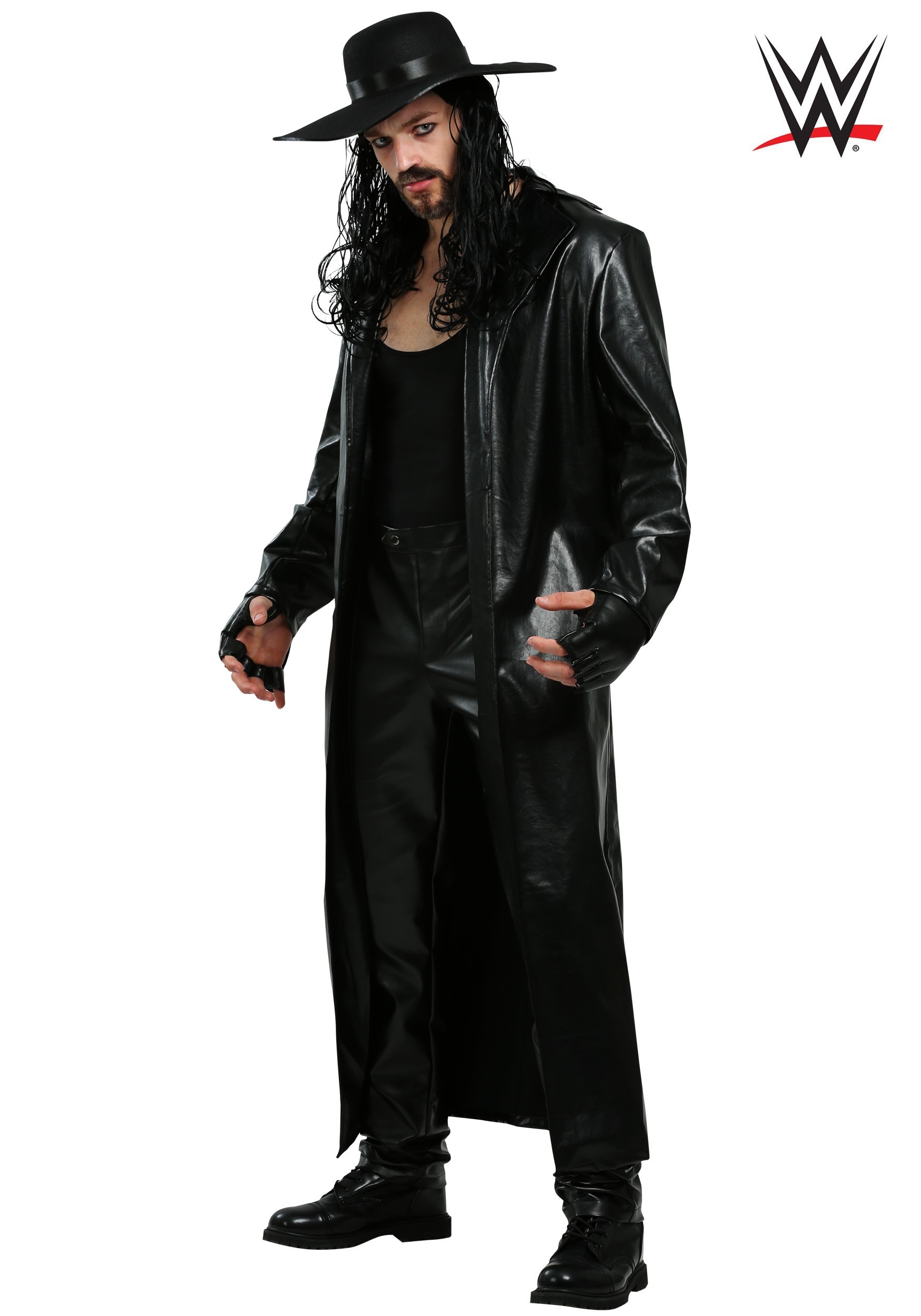 The Undertaker has been around since what seems like the beginning of time, consistently striking fear into his opponents. He is seen by many as an unstoppable force, which is pretty much true considering he once won an unprecedented 21 straight Wrestlemania matches. While the Undertaker featured several looks over his historic career, one thing that remained the same was the color scheme: black. If you’re going to dress as the Undertaker, you’re going to need black and lots of it. What better way than to don his signature black overcoat and hat? 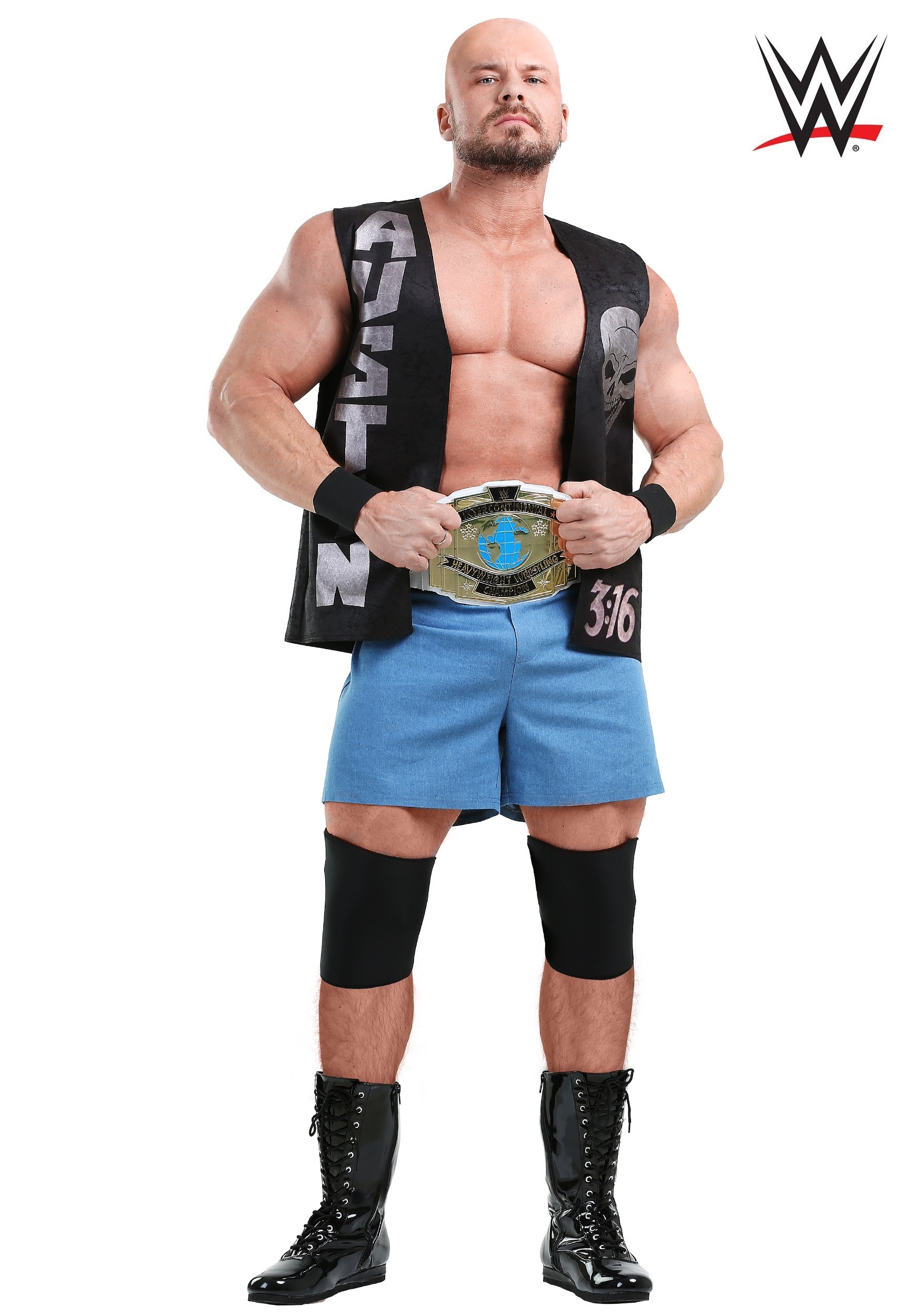 In the late 90s, nobody captivated fans like "Stone Cold" Steve Austin. Every time you heard the shattering glass sounds that kicks off his theme music, you knew it was about to get crazy. If you’re all up for fighting with authority and pulling off crazy stunts that include driving a monster truck into the arena or burying your opponent in a big pile of dirt, then dressing up as Stone Cold is the costume for you. 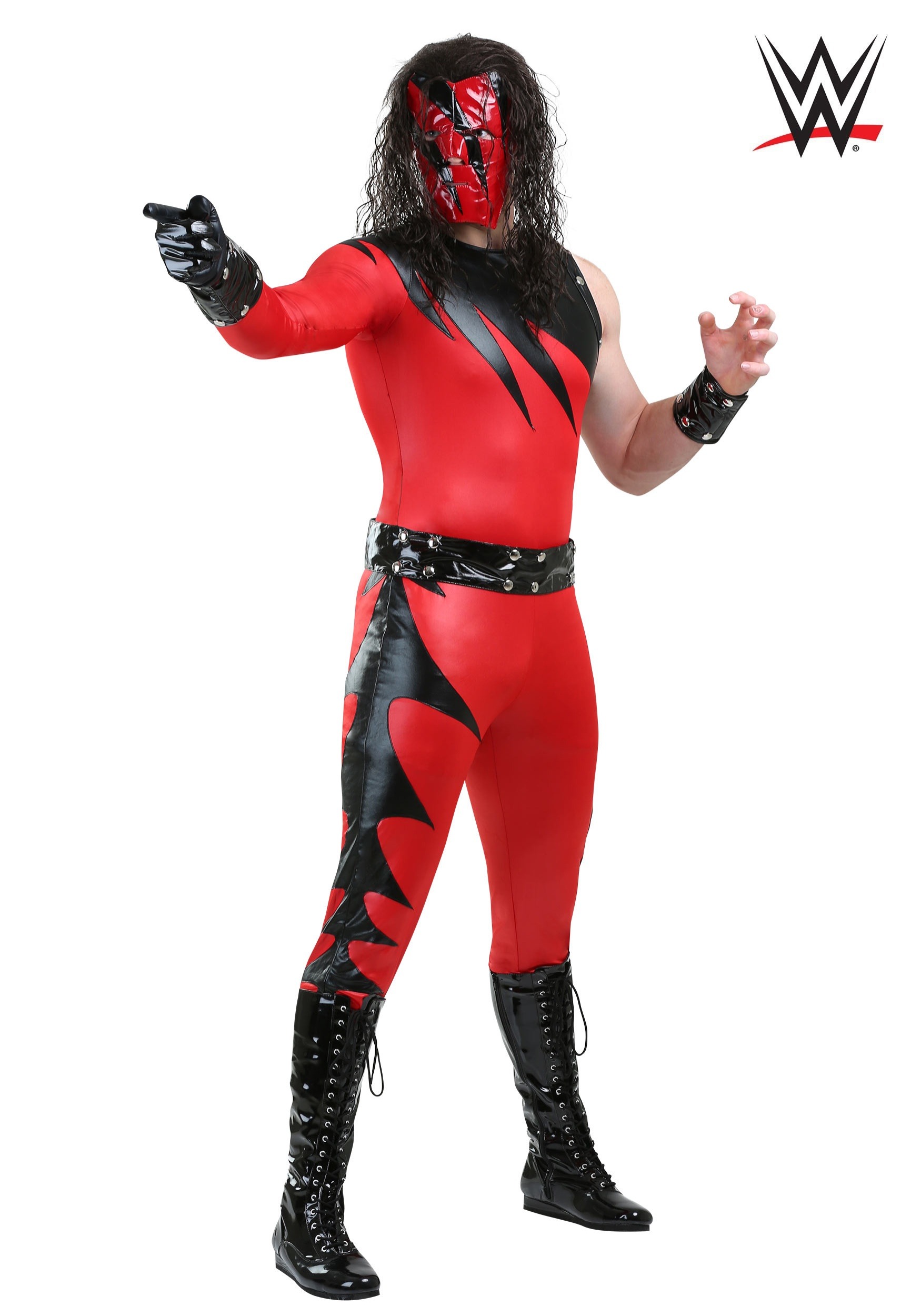 If there’s one wrestler you don’t ever want to cross, it’s probably Kane. He’s big, he’s bad, and he’ll choke slam you through a table if he has to. Dressing up as Kane doesn’t mean you have to be big and mean, but if you're going to wear a bright red-and-black suit with that menacing mask, you're sure to get some hostile looks. Besides, part of the costume is becoming the character and Kane has never been a nice guy. 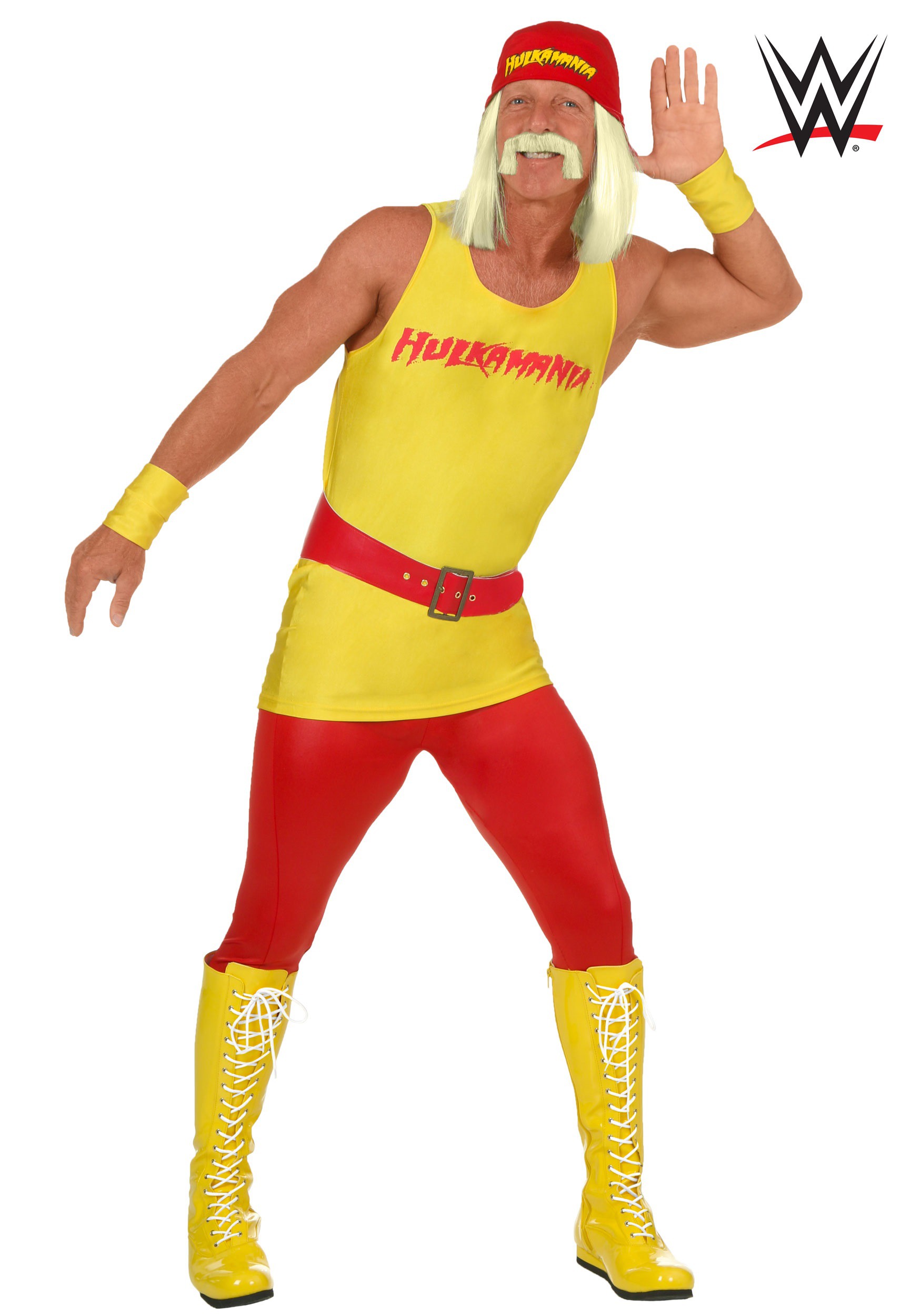 Hulkamania will never go away, and this costume shows it. Take a trip back to the 80s with the Hulkster's classic red-and-yellow-themed outfit. Get ready to take to the ring, flex those biceps, and listen for the crowd cheering you on. Just be sure you don't take off that shirt by tearing it in half. It may look cool, but you'll have to replace it. Complete your look with some yellow wrestling boots, authentic wig, and a championship belt. 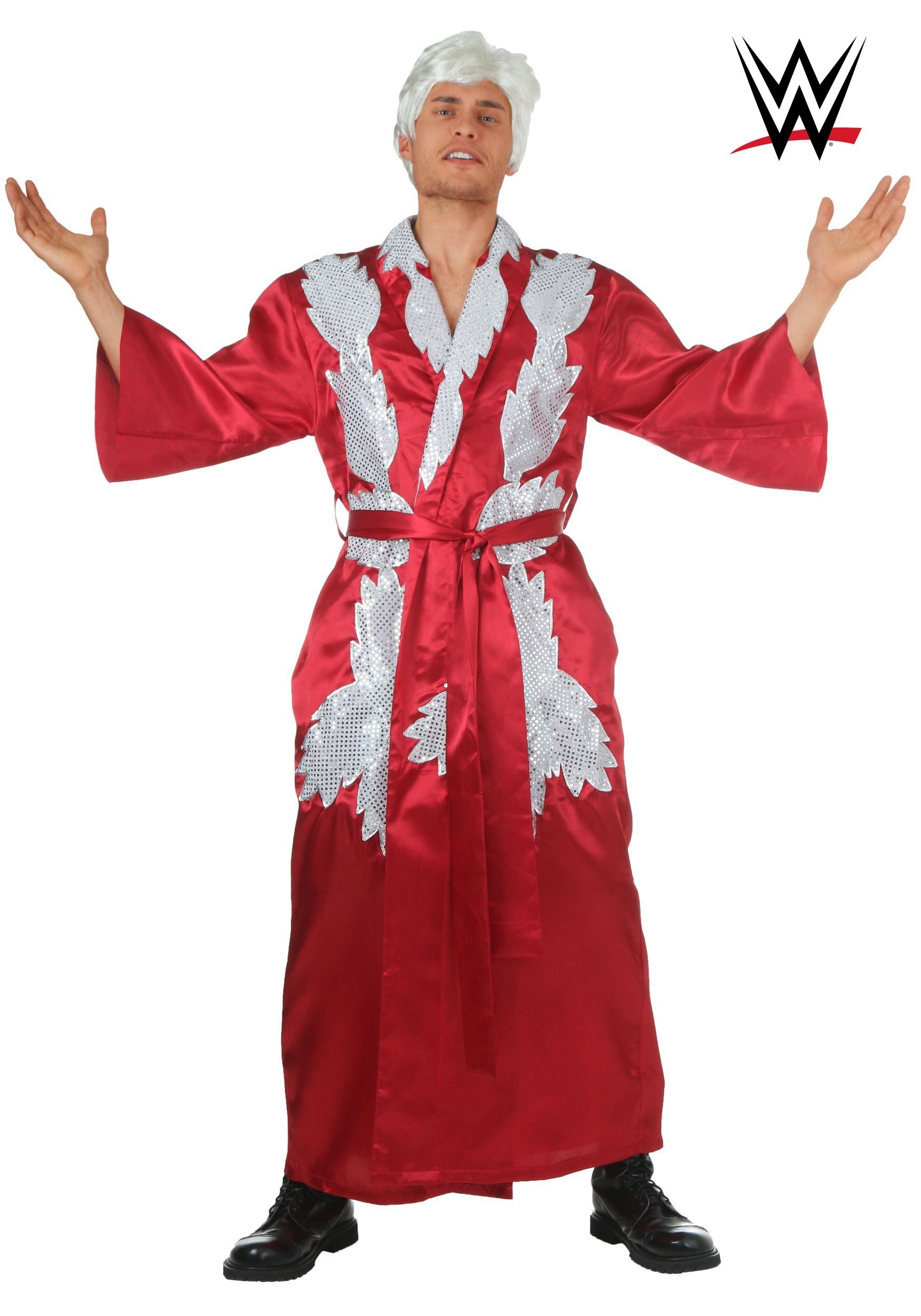 Woooo! If you're looking to make a grand entrance wherever you go, then dressing up as Ric Flair is the best option. During his incredible career in wrestling entertainment, Flair is known for the grandest ring entrances, wearing an extravagant robe in various colors with sequins or feathers and his moniker "The Nature Boy" scripted across the back. Unlike most wrestlers who came entered to the themes of upbeat rock tunes, Flair's entrance music is a section from Strauss' classic "Also Sprach Zarathustra", a drawn-out section of horns that slowly builds up. If you're planning on the dressing as Ric Flair, these are the details you'll want to focus on for the character because once the bell rings, it's all business. 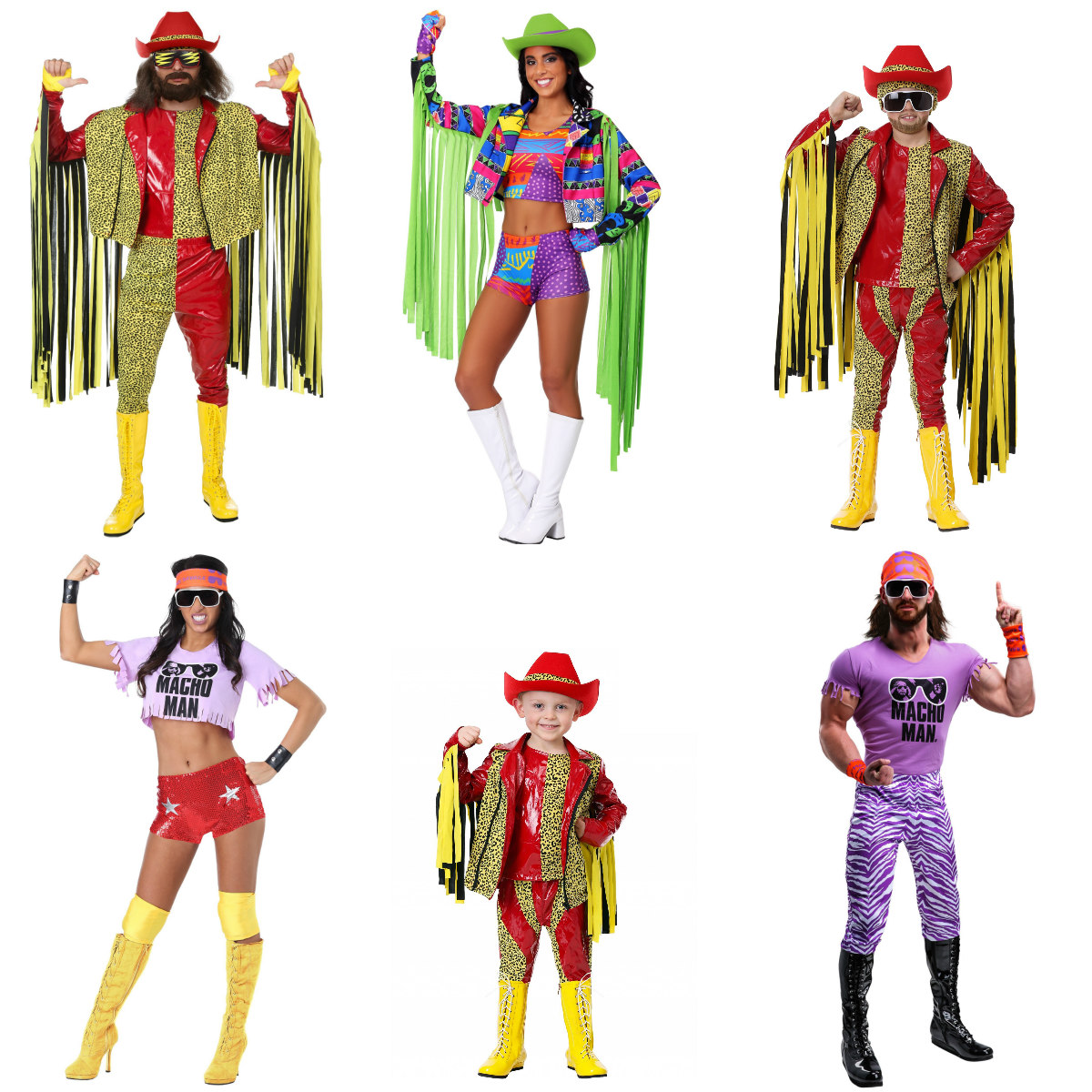 Whether he was flying off the top rope to drive his elbow into an opponent or fired up during a backstage interview yelling “OH YEEEEAAH!”, "Macho Man" Randy Savage never failed to bring the energy. His wardrobe is typically as loud as his character. If you’re going to dress up as the Macho Man, be ready to go all out with bright colors, leather, and animal prints. One of the best college Halloween Costumes for sure! 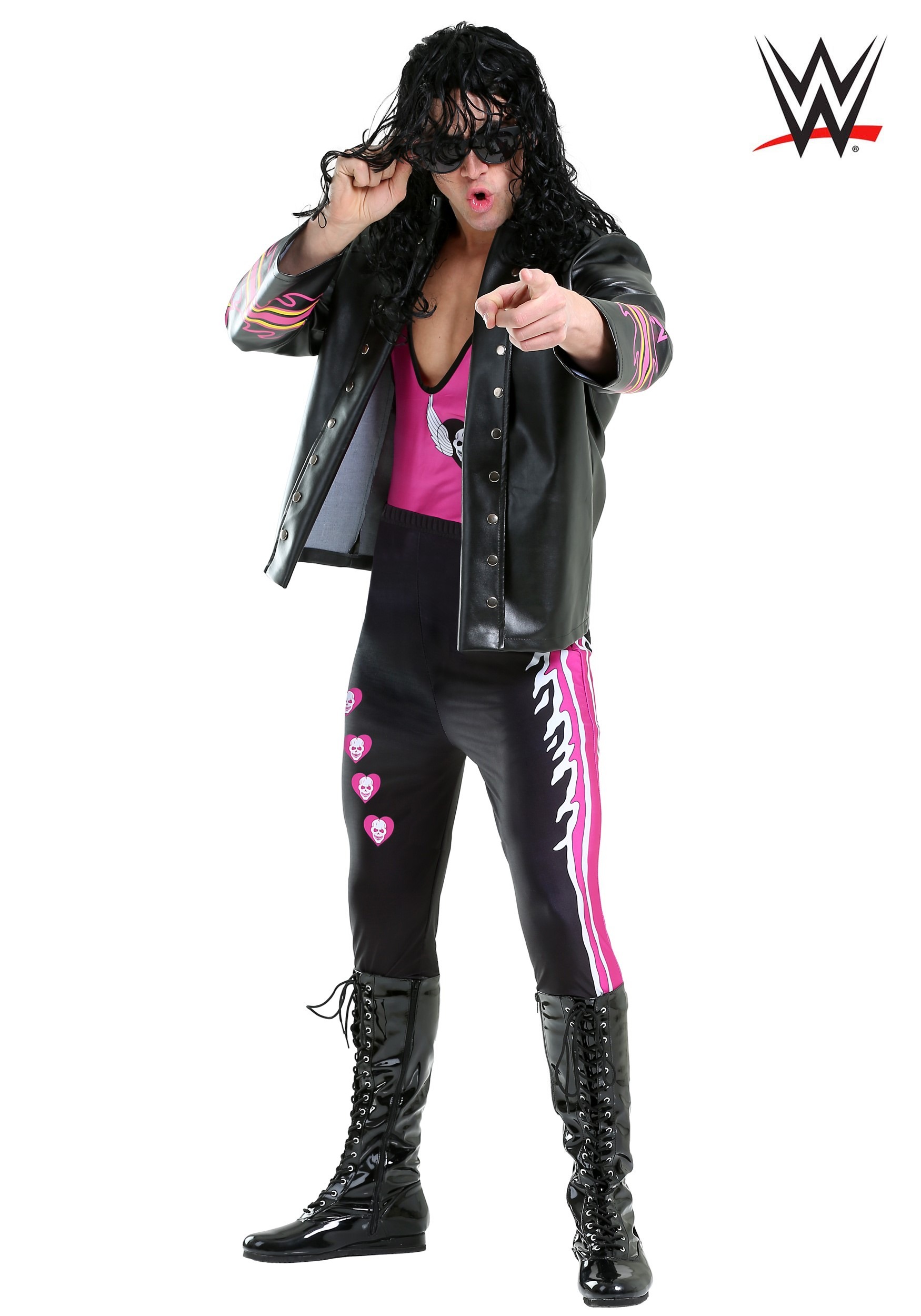 Bret Hart is most known for his signature pink-and-black wrestling attire complete with black glasses and leather jacket he'd wear during his entrances. His finishing move, the Sharpshooter, was further evidence of how technically sound he was in the ring. That doesn't mean he always played by the book, but was still highly regarded by others. We're sure that if you were to dress up as Hart, he'd describe your costume (as he'd often describe himself) as the best there is, the best there was, and the best that ever will be. 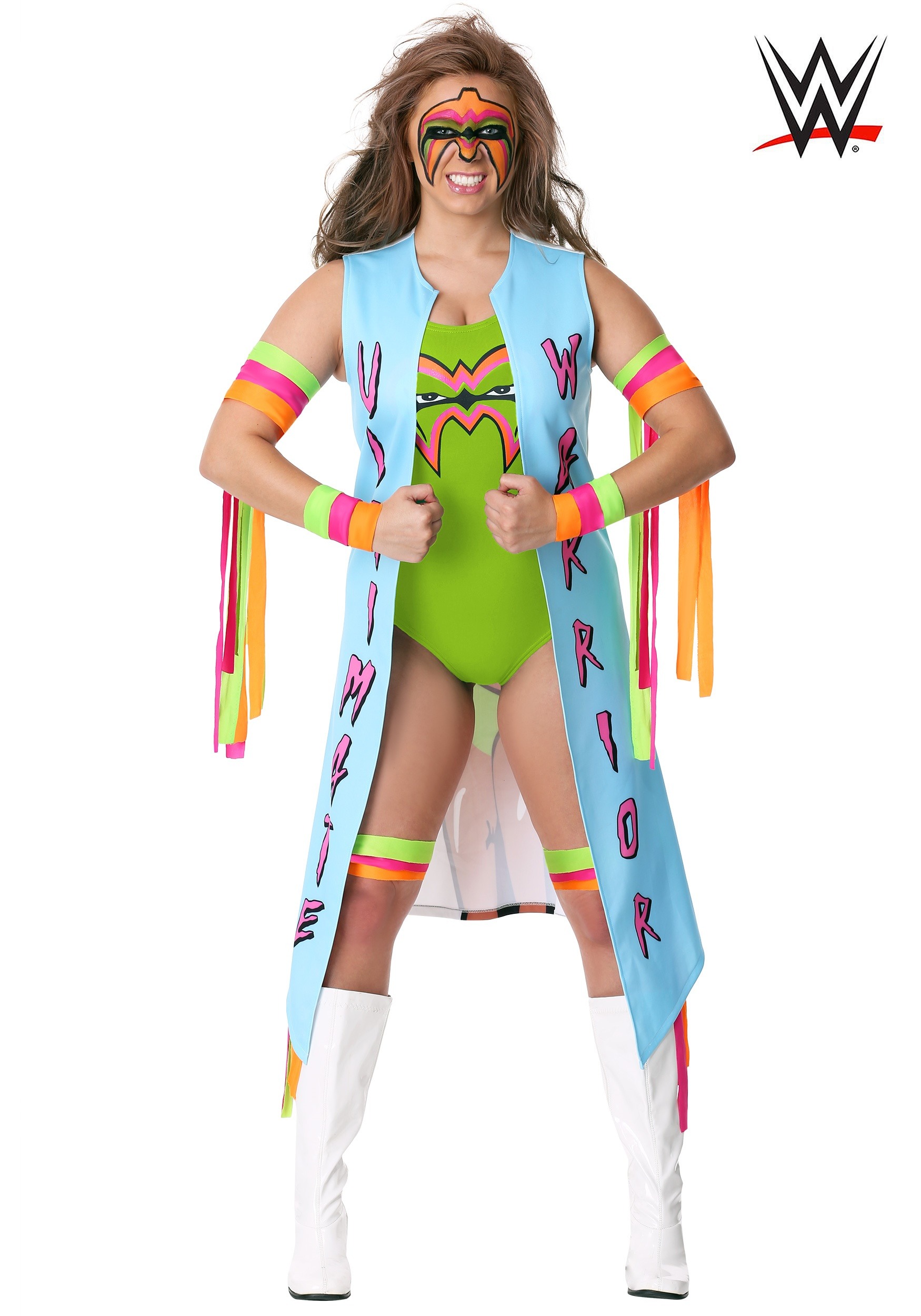 Up next is our Ultimate Warrior costume! This WWE costume for women includes a green bodysuit with the iconic mask logo, a vest with the Ultimate Warrior's name and image, and bands for your wrists, arms, and legs. Of course, you'll probably want to pick up some face paint to finish off the look, but we'll talk about that later on. Now you just need to get excited for your epic introduction at the Halloween party! 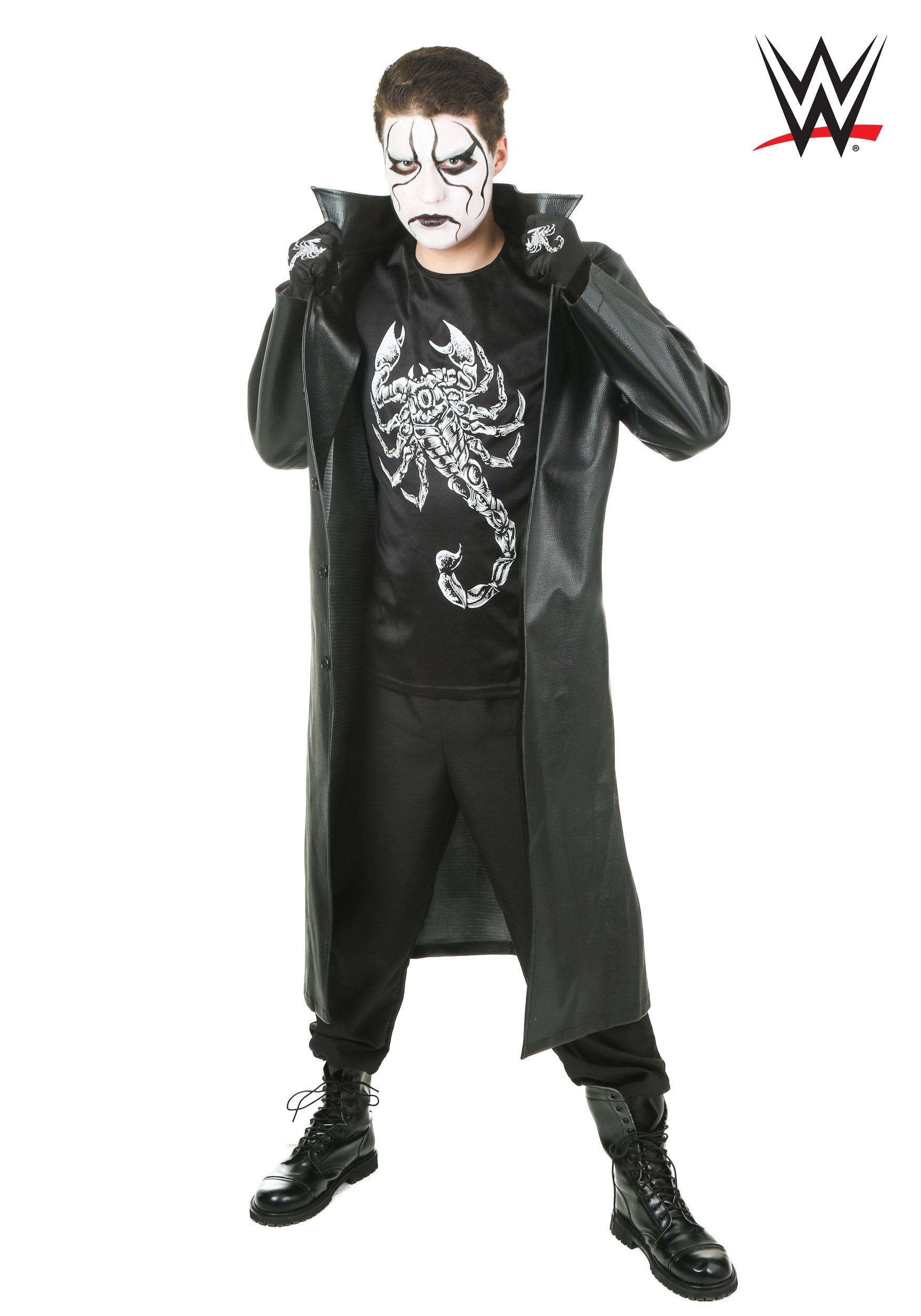 Sting was known as one of the most popular wrestlers who never wrestled for the WWE, at least until he signed with WWE for two short years. And we're glad he did, because it means we could bring you this Sting Halloween costume! Before his retirement, Sting faced off against so many of the other titans of wrestling. That means this Sting costume is perfect to pair with any of our other WWE Halloween costumes for a WWE group costume idea! 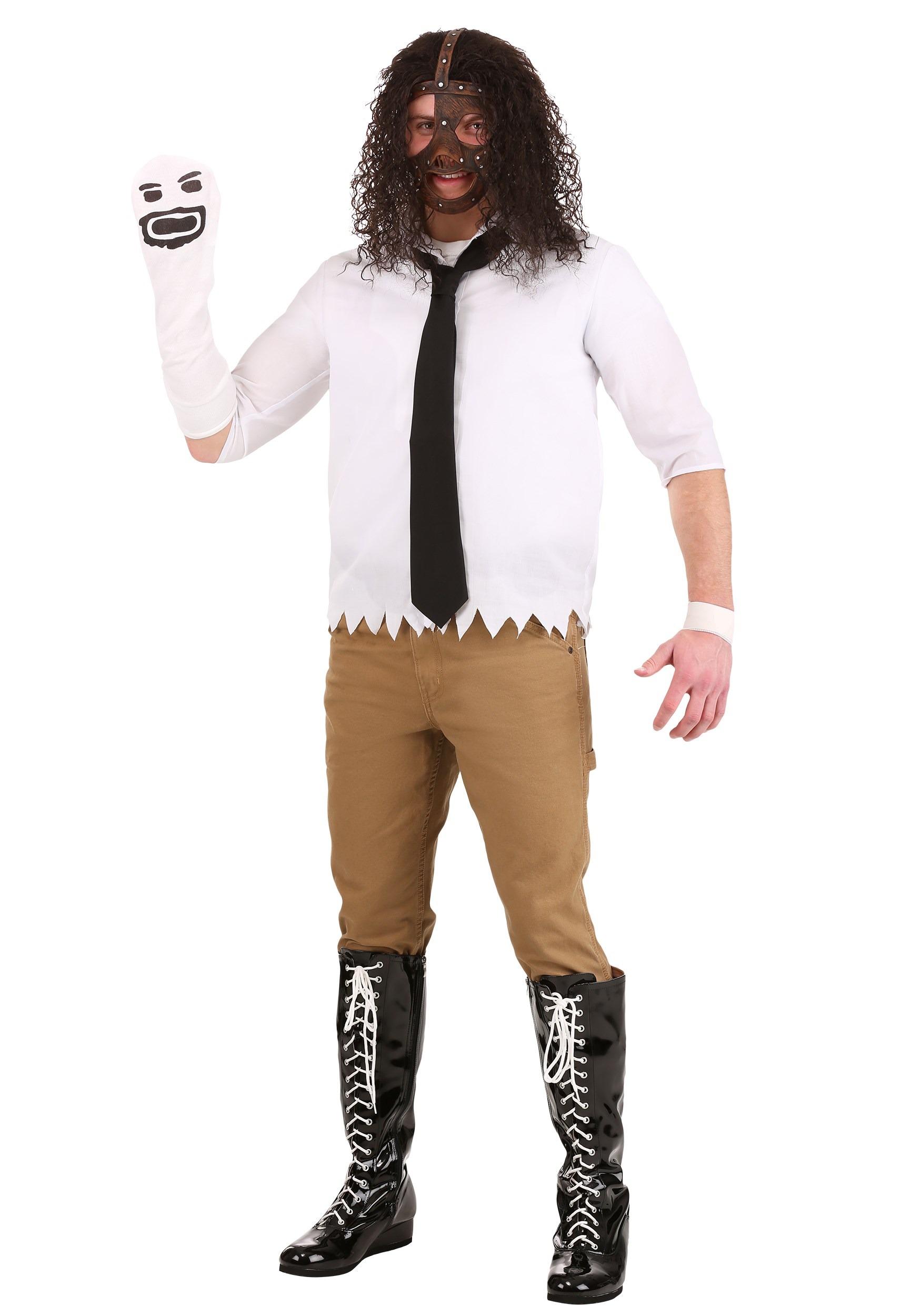 Mick Foley is another one of the all-time greats, as himself and as three different personas: Cactus Jack, Dude Love, and—of course—Mankind! That's right, this costume includes his legendary leather mask and hand puppet sock to make one incredible Halloween costume. If you want to bring some extra surprises to the party, pick up a barbed-wire-covered bat and a hippie costume to change into Foley's other wrestling personas, Cactus Jack and Dude Love. 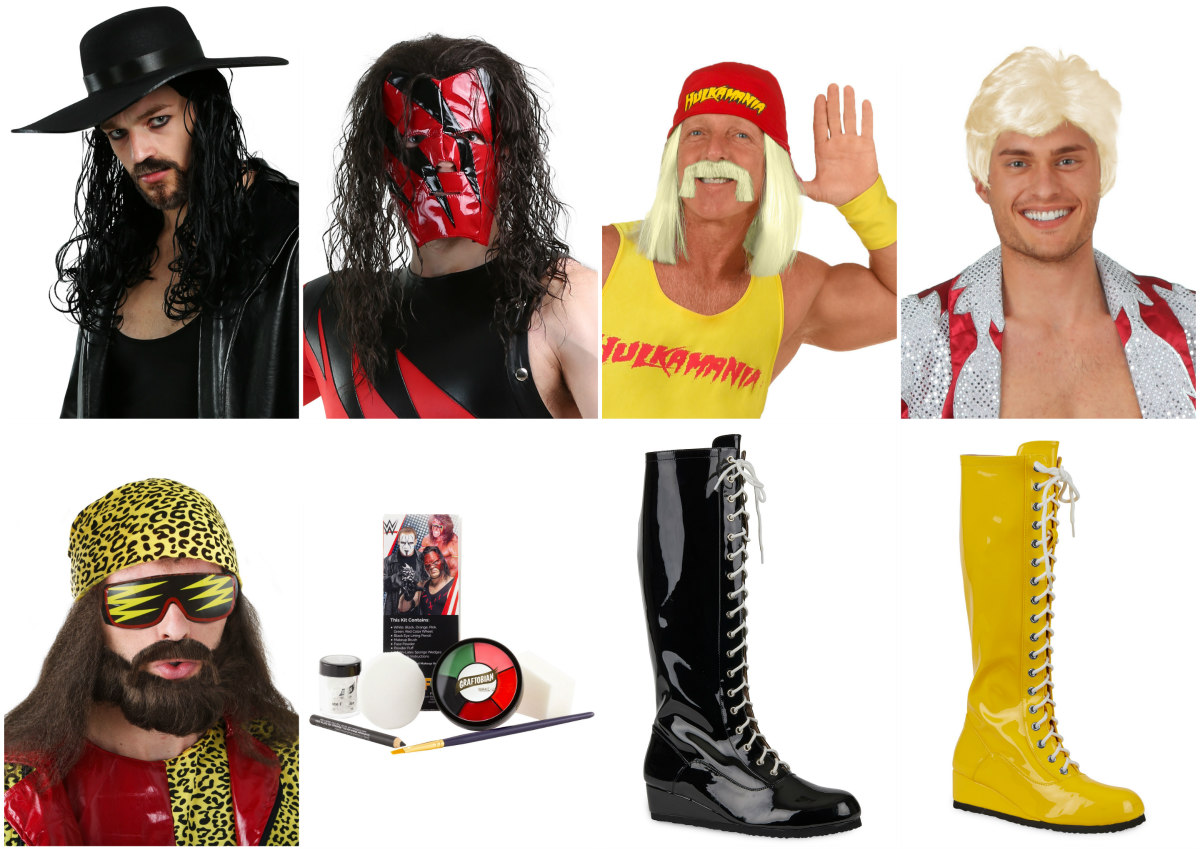 If you're planning on dressing up as a WWE Superstar, you'll want to make sure your costume is complete. A pair of wrestling boots are perfect to wear in the ring or any Halloween party. Depending on who you're dressing as, you'll need the right hair, too. If you don't have long, flowing locks of hair to resemble your character, you'll want to pick up a matching wig for the most authentic look. If you're going to be Steve Austin, be prepared to put on a bald cap (unless you're bald already or really committed and willing to shave your head).

So, do you think you're willing to throw on a wrestling costume and go toe-to-toe with others to compete for the Halloween costume world championship? Who is your favorite WWE wrestler of all time? We're really big fans of the Undertaker because of his dark appearance and his devastating Tombstone Piledriver, one of the greatest finishing moves in WWE history. All the costumes featured here are exclusively made by HalloweenCostumes.com. You can check out our entire selection of WWE costumes here. Whether you're dressing up for Halloween or for a WWE event like the Royal Rumble or Wrestlemania, you're sure to be prepared for all the high-flying action.