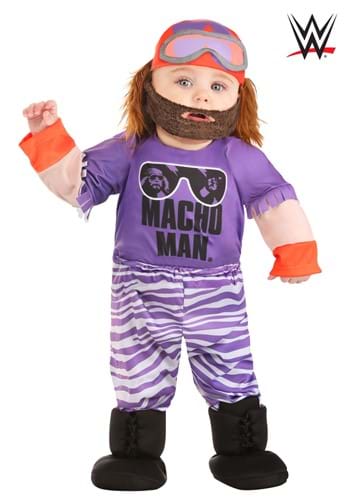 LAIIIIIDIES and GENTLEMEN! You're about to see the biggest showdown in the history of WWE! In this corner, we have...well, it doesn't really matter who's in that corner, because in the OTHER corner, we have Macho Man! Don't let his small size fool you, because his opponent is about to get stomped! He's rough! He's tough! He has a few tricks up his sleeve that we've never seen in one of these matches before, including biting, slapping, spitting out baby purees to make the floor slippery, poking his oppenent in the eyes, and more! Plus, he is just exceptionally cute! You wouldn't think that would be an asset in the world of professional wrestling, but most of us are too busy awww-ing over his adorableness to know if he makes a dirty move. That's real power!

Your little one might be fearsomely spirited, but when he wears this officially licensed, exclusive Macho Man Infant Costume, he'll also be fearsomely adorable! Let your child dress as one of the greatest WWE champs of all time in a costume fit for the biggest of wrestling personalities. The purple T-shirt has fringed sleeves and the worlds "MACHO MAN" printed on the front underneath a graphic of sunglasses with Macho Man's face reflected in its shades. The purple zebra-striped pants are just right for doing a trademark takedown. The booties slip on easily and the headpiece with its faux hair, bandanna, shades, and attachable beard is the perfect tongue-in-cheek accessory.

And the winner of the Best Costume Contest is...Infant Macho Man! Again! Go ahead and give him his championship belt - he's earned it!