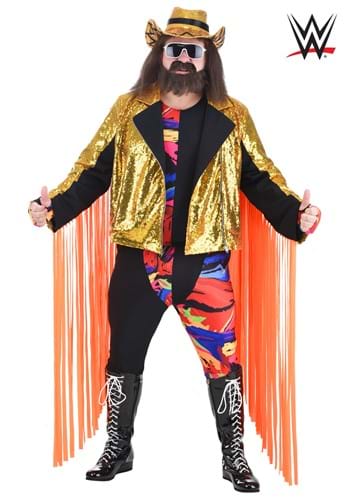 Be prepared. When you wear this Macho Man Randy Savage Plus Size Costume, there will be expectations. Wearing this costume is a big responsibility and you'll be carrying the mantle of one of WWE's most iconic wrestlers of all time. First off, you'd better practice your posing. Embodying the great Randy Savage means copying his flexing and over-the-top movements. Everyone that sees you will want you to unleash Macho Man's many catchphrases, so you'd better put some practice in saying there phrases:

Once you have those down, you're ready for this Macho Man Randy Savage Costume, which is officially licensed from the WWE.

Our costume designers wanted to craft an outfit that's worthy of a WWE legend. The plus size costume begins with an audacious jacket, which has a front zipper and is covered with shimmering gold sequins on the exterior. The back of the jacket has the printed Macho Man logo, complete with pair of sunglasses in the middle. The tank top features a brazen, colorful side, which looks like the entire 1980s exploded onto it. The other side of the top is jet black. The pants have elastic in the waist. The wild fingerless gloves match the pattern on the tank top and pants. Of course, you can't complete your Macho Man transformation without a cowboy hat! This costume comes with a classic Macho Man hat that's covered in gold sequins, so you can shimmer and shine as you walk into the ring!

Too Hot to Handle

So, what do you think? Are you ready to take on the role of Macho Man? With this plus size Randy Savage costume, you'll be ready to enter the ring in style... as long as you've been practicing that Macho Man voice, that is!