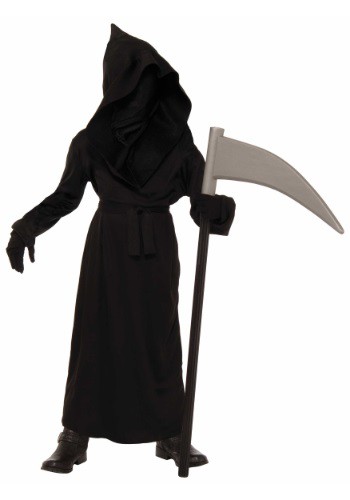 Some kids don't want to be cute fuzzy animals, sports stars, or star-spangled superheroes. Some kids? Some kids would prefer to be Death incarnate.

Now don't worry, folks. It's pretty normal for kids to go through a phase where they only like scary things. We've all had those phases ourselves, and we turned out alright! And just so you know, we like to think of it less as a phase and more as a new set of ambitions. Think about it: if your kid were Death, they would be all powerful. Death is way cooler than an animal, and far mightier than a superhero. They wouldn't have to do any more chores. They wouldn't need school, and they could take anyone's life-force at whim... on second thought, we're totally cool your kid isn't actually Death.

Regardless of what your kid aims to do as Death, you can't deny the gnarly factor. At least they're aiming high, right? And whereas everyone has a slightly different idea of Death, our Child Faceless Phantom Costume is the classic Grim Reaper in style. It's got a long sleeved robe with a tie sash. The wicked looking hood is large with a mesh to cover your child's face. All the better to look like a faceless phantom! Please note that tools of destruction do not accompany this outfit, and must be procured separately. Happy haunting!