Adult Fade In and Out Phantom Costume 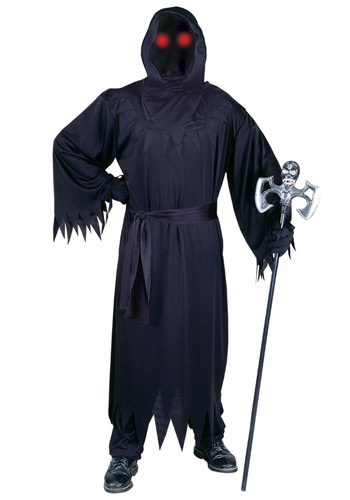 What is the difference between a ghost and a phantom? We’re not setting up a joke, we’d genuinely like to know. And as long as we’re asking questions, where do specters, shades, ghouls, spooks, haunts, and apparitions fall on that spectrum? Are these all one and the same? Or are there subtle differences that those of us in the living world are never going to understand? We’d say we’ll ask the next undead spirit we happen to meet, but if we do happen to encounter one of these things, we’re pretty sure we’re going to be too s-s-s-scared to get a word in edgewise.

So anyway, this fellow is identified as a phantom. We have no way of proving or disproving that, so we’re going to take him at his word. If you’d like to question him any further, you’re certainly welcome to, but don’t blame us for what happens when those burning red eyes start glowing out from that jet black hood. We don’t know for certain what that might be, but we would bet just about anything that it’s nothing you want to be on the receiving end of.

Maybe it would be better just to walk a mile in the phantom’s shoes. (Although, do phantoms even have feet? Wait, let’s not add even more questions to this mess.) Take a walk on the spectral side in this polyester robe with tattered edges and a pair of black gloves. The see-through hood closes with Hook and Loop fastener and features a pair of battery-powered red eyes that fade in and out for an even more terrifying effect. We can’t tell you what to say if anyone asks what makes you a phantom as opposed to a ghost, but we’ll guess that most folks will want to keep the nosy questions to themselves.