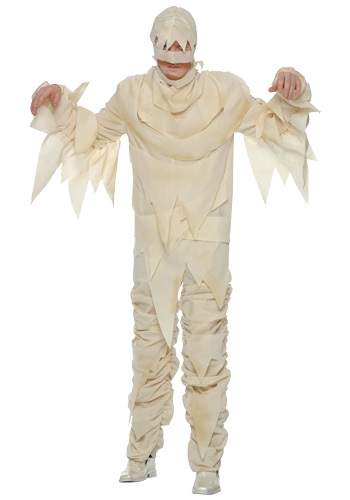 Throughout history, it has always been a bad idea to rob graves. We're not saying you're a grave robber, but if you are: seriously, stop doing that! Why? Because, aside from the fact that it's incredibly rude, you also have to worry about mummies. "Mummies?!" you're thinking, "Mummies aren't even real!" Uh, really dude? You really think they're not real? Explain this costume then. Why did we make a costume so people could pretend to be a mummy if mummies aren't real? It's ridiculous. Obviously, mummies are real and they're pissed. Because you keep robbing their graves. Or burial tombs, or sarcophaguses (hmm, or is it sarcophagi? Maybe it's both?).

Put yourself in a mummy's shoes... or wraps. You're hanging out, just chilling, neatly swirled in your mummy wrappings, and suddenly some guy starts creeping in your tomb, looking at your golden urns or your Xbox or whatever else a mummy keeps in his tomb. And maybe the guy doesn't take anything, but more importantly how did he even get in your tomb? That takes some serious effort. And you've called the mummy police every time this happens but they move so slow and the perp is long gone by the time they show up. So you take matters into your own hands and start cursing/haunting people. They pushed you over the edge, so now they need to die. Makes sense if you ask us. So before you start robbing graves, consider who you're affecting with your actions. And if you're sick of people robbing your grave, become a mummy, chase them down, then maybe grab a cup of coffee and a nice book. You don't get out of your tomb much. Take advantage!