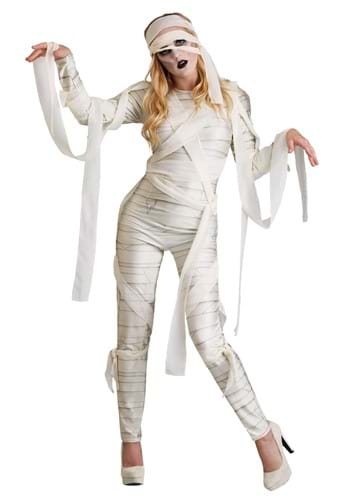 Everyone warned the newest archeologist team on the Necropolis block that delving into the mysteries of the last pyramid on the left was a bad idea. Some beings just shouldn't be disturbed from their deep slumber. And if these archeologists don't want to have some serious Egyptian curse on their hands, they were going to have to stay out. Then they hatched a plot.

They were going to get their hands on some fresh, historical artifacts without all the horrific hassle by blending in with the tomb's locals. First, they tried wrapping toilet paper around their bodies but the soft tissue simply didn't stand up to all the dust and sweat of uncovering majestic murals. They decided to get serious before the local mummified king woke up and got wise. This under wraps mummy costume was just the thing to explore the tomb with ease without worrying about coming undone just as you get to the throne room.

Don't worry about carefully wrapping yourself up in gauze when you've got this handy mummy body suit. Since it's Made by Us, you can be sure that you're wearing an awesome look that'll also stand the test of time. Our in house designers made sure it's extra elegant. It's made with shiny fabric that has wrap print throughout the whole costume, cause you shouldn't have to leave glamour behind just because you're an ancient dead diety.

Rising to the Occasion

Whether you're a mummy rising from the tomb or you're an archeologist trying to blend in, this mummy suit will make you ready to come out of your pyramid with style and ease. Want to polish off your look in royal style? Consider a Cleopatra headpiece, gladiator sandals, and cat eye makeup to wrap up your costume just right!