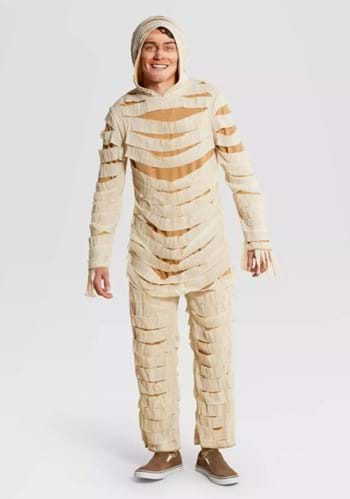 Those foolish archaologists were warned. Ancient scroll after ancient scroll confirmed the dark prophecy. No good can come of opening Pharaoh's tomb, the hierogylphics said. Stick to other digging grounds. But the archaeologists refused to listen. Dazzled by the thought of glory and fame, they were greedier than a kid left unsupervised next to a bowl of Halloween candy. They broke open the crypt, descended into the tomb, and wrenched the lid from the sarcophagus. With that intrusion into his rest, the power of Pharaoh was reawakened! Those who did not drop from terror on the spot fled shrieking into the sun, where they fell prey to weird accidents. A freak sandstorm, an infestation of flesh-eating beetles, a blizzard of ravens - such is the wrath of the undead Sun King!

Pharaoh lives again in this Crypt Mummy Costume for Adults! The tan-colored jumpsuit features raggedy bandages wrapped around the torso and arms. Shredded wrapping material dangles from the sleeves. The attached hood also has bandage detail and hides the places where the embalmer sucked out your brains (yep, brains were thought to be useless organs back in Ancient Egypt).

Return of the Mummy

Start practicing your moaning and groaning! As a revived mummy, your job is simple: stumble through the world with your arms out stiff in front of you and suck the life from anyone unlucky enough to get in your way. Unless you're invited to a Halloween party, that is. In that case, eating fellow party guests is considered bad manners.