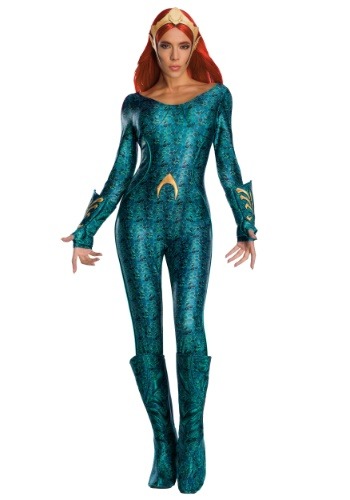 They say money is power. That really depends. Is money still power if you're up against someone who can control the waters and talk to ocean creatures. We think not. We think Sir Fancy-pants Mcgee would be in a whole lot of trouble. Hot water, if you will.

Queen Mera won't be held back by anything. She does what she wants. After all, who's going to smile and pretend to be normal when she can summon a tidal wave with the flick of a risk. We have to say, we wouldn't mind having her skills. Just imagine how easy it would be to get out of an uncomfortable conversation.  As soon as they ask you about work you could make the small-talker's water jump up and tsunami all over his or her shirt. Rude, we know, but who's going to know it was you? Plus, it's not like other kinds of power aren't used in rude ways (Yes, we're looking at you, people who obnoxiously giant yachts).

Mera's powerful hero uniform game is going strong with this show-stopping bodysuit. The flexible suit has a wide neck, some subtle structure around the bodice and waist. A shining scale pattern makes you feel comfortable in an oceanic setting. With a striking combination of aquatic colors and dashing gold, no one you meet will doubt you're the queen of the seas!

Water Has No Enemy

The beautiful thing about controlling the earth's water? Water is absolutely everywhere. Water is both the bringer of life and a destroyer. Just ask the Grand Canyon. You can burst the pipes of any building. Turn any snowbank into a boiling tide. A power like this is only limited by imagination. That's why no one ought to stand in your way when you show up as the Queen of Atlantis. Unless they want to see your "royal wave" they'd better bow down!