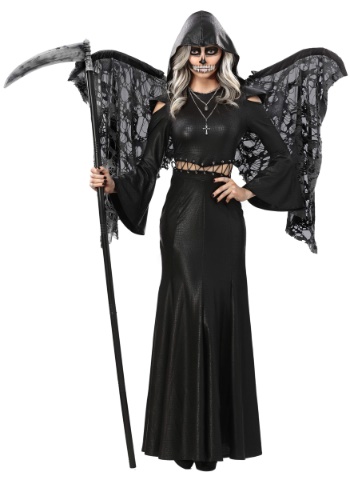 Choosing a profession has always been difficult. It feels so final and the decision process takes so long! We're asked what we want to be from the first few weeks of our lives to the last few weeks of high school. By that time, we better have it figured out. In short, it can be a stressful process. On earth it's tough enough, just imagine if you were choosing a job for eternity!

Most people would choose to be angels, of course. Ushering people through the pearly gates, playing harps on fluffy clouds, maybe appearing to deliver messages to earth every so often. They play concierge to heaven. Honestly, to us, that gig seems a little dull. Other people might want to be demons. Getting to cause all sorts of mischief on earth and plot schemes in the steamy depths of hell. But what's most important job? Reaping! A grim reaper isn't a villain, it's a job that has to be done. They play the role of taxi, babysitter, and bounty hunter. Without them, there would be crickets chirping at heaven's door and earth would look like a box stuffed with thousand-year-old raisin-people. Not a pretty sight. We should be grateful.

This Halloween you can demand the respect a grim reaper deserves. This floor length dress has a subtle scaly fabric with a dramatic hood, a threaded midriff, structured shoulders, and wide priestess sleeves. The long skirt is fitted on top with a full hem that hangs close to the legs. It's topped off with black, ragged wings, perfect for that breathtaking entrance. With a uniform like this, it's hard to believe more people don't choose this career path more often!