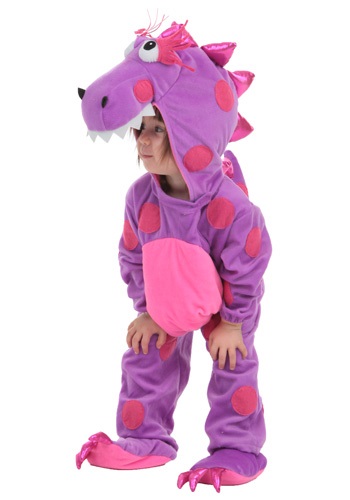 Dragons sometimes get a bad rap. Everyone thinks that all they do is fly around and burn down buildings with their fiery breath and kidnap princesses and eat knights. But not all dragons are like that, we promise! In fact, we know one that is sweet as can be—Teagan the Dragon.

Teagan is an adorable purple dragon who only wants to have fun and make new friends, which means she’s the perfect companion for your little one. Instead of using her fiery breath to burn down barns, Teagan likes to roast marshmallows to make s’mores. Instead of kidnapping princesses, Teagan likes to play dress-up with them. And instead of eating knights, Teagan prefers to eat ice cream (after a healthy, well balanced dinner, of course!). She is nothing like most dragons—she’s much better!

If your toddler wants to dress up like the world’s sweetest dragon, we have just the thing: this Toddler Teagan the Dragon Costume. The soft purple jumpsuit is covered in cute pink polka dots and comes with a matching hood that has a dragon face on the top. Stuffed pink spikes run down the back of the hood to the tip of the attached tail, and attached shoe covers feature pink stuffed claws. The costume fastens in the front with a Hook and Loop fastener strip for easy wear. As soon as your toddler slips into this costume, they’ll be the cutest dragon ever to soar through the skies!