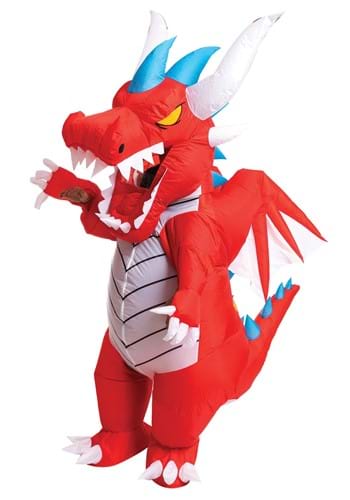 Apparently, It's Not a Myth

We've all heard stories about the mighty dragons of yore, who were feared and reverenced far and wide for their incredible firepower. Alas, when they hadn't been seen for years, everyone assumed that they were extinct and stopped worrying about them. Turns out that the dragons really were still around, and they're a little angry about being forgotten! Why wouldn't you invite all the dragons to a Halloween party? They should be first on the list!

Unleash your fiery wrath (in a cute kind of way) by wearing your Adult Inflatable Angry Dragon Costume! The outfit is made of sturdy red windbreaker material that, when fully inflated, resembles a huge dragon with a long, blue-spiked tail and outspread wings. Fake hands and feet with long white claws have elastic-lined openings to let your human hands and feet poke through. The dragon's mouth is lined with white fangs and is open in a roar so that your head can peek out.

Actual dragons were probably huge hits at parties, since they could roast marshmallows and reheat cold pizza with just one blast of their flaming breath. If this kind of trick isn't your forte, don't worry, because having a dragon attend a party is still a really big deal. Also, knowing that you won't accidentally burn the house down with a badly timed sneeze will probably make your host feel much better about his or her insurance rates anyway.