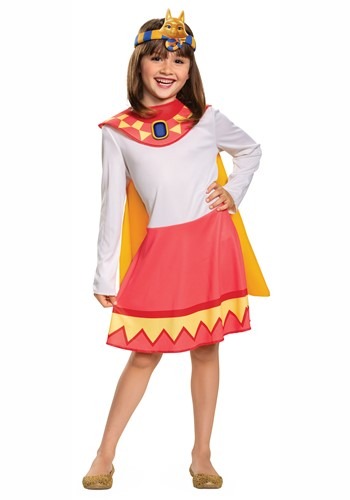 Generally, the monster kids on the TV show Super Monsters are just that—monsters. Zombies, vampires, werewolves, are all represented on the show. Even the witches seem more like monsters with their blue and green skin. But there is one character who looks human in both her human and monster forms. That little girl is Cleo Graves, daughter of Cleopatra and princess of Egypt. She also happens to be a mummy! Despite her human origins, Cleo has control over the wind and can create sandstorms and other weather. But most importantly, she gets along with her monster friends! Let your child play the princess in this Super Monsters Toddler Cleo Graves Classic Costume.

This costume is based off of Cleo's mummy form, rather than her human one. Rather than deal with a bunch of bandages, this costume is all about her dress, cape, and fancy headpiece. The dress uses a longsleeve, white top section to represent the bandages, while the bottom is a red orange color with a jagged yellow design at the hem. The cape and foam collar are one piece and come together on the right shoulder. The large, printed blue gem on the front of the collar hints at the blue and gold striped cape on the back. The headpiece is also striped with blue and gold and features a cat face on the forehead.

She may be royalty, and she may be a mummy, but Cleo is just a regular kid, too. Like her monster friends, she loves to play games, test out her abilities, and enjoy new experiences with them. That sounds like most kids to us! So let your child enjoy having superpowers for the next costume party or for trick or treating. Princesses need their sweets!