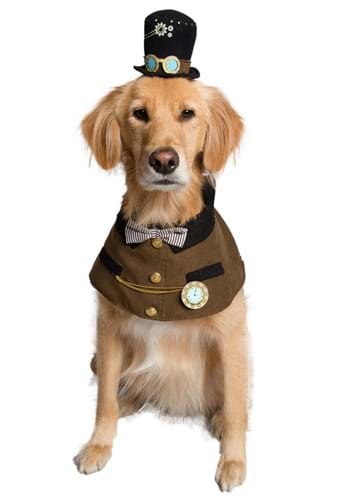 Things are often not what they seem. On a surface level, you might think that a bygone century was an outdated time, lacking foresight and the technological advances needed to really make progress. In reality, that's just what history books would like to make you believe. The past age was brimming with wonders, from H. G. Wells' invisibility potions to Jules Verne's underwater behemoths, to entire cities mounted on wheels to rumble across the land. And the hand behind the scenes, creating all of these scientific, mechanical wonders...is actually a paw. No, really. What, you didn't realize that your pet's loveable clumsiness was all an elaborate act?

Show your pet's true genius with this uniquely adorable Steampunk Costume for Pets! An inventor of his caliber deserves the right outfit, so give him a snazzy brown "vest" with gold buttons and a little striped bowtie. It fastens around the neck via an adjustable collar and features a tiny pocketwatch and chain for that touch of authenticity. The mini top hat has gear-and-cog details as well as a sewn-on goggle decoration.You know, to protect your pet's eyes when he tinkers in his lab or powers up his giant dirigible.

The Power of Cute

Lit lovers and film buffs may never agree about what is the best steampunk story of all time, but they'll definitely agree that your pet has the cutest outfit they've ever seen. Rewrite history by giving it the greatest hero of all time - your own fur baby!