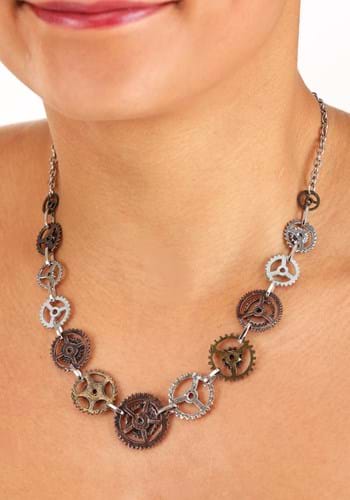 Our generation has seen technology change more rapidly than any generation prior. Not long ago, math teachers would say, “Learn how to do math by hand, you won’t always have a calculator in your pocket!” Nowadays, everyone carries a pocket-sized touch screen, more commonly known as a cell phone, with a calculator on it. There is a universal nostalgia towards the technology of yesteryear and it goes further back than millennials’ fascination with records pressed with recent releases.

The term steampunk was coined in 1989 to describe a science fiction subgenera set in the 1900s. The stories depicted Victorian-era scenarios with steam run technology. Coincidently, the fascinating subculture didn’t reach its pinnacle until the 2010s. Rolling with the times, the entire retro-futuristic scene adapted to include countless other periods in time.

Our 18” Single Chain Gears Necklace is as versatile as the Steampunk ascetic itself. The silver-tone and bronze-tone gears accent your World War II inventor or apocalyptic anti-hero cosplay perfectly. The necklace’s largest gear is 1’ in diameter, which means it’s subtle enough to be worn as a daily nod to your steampunk side. The point is, if you choose to fly in on an airship or drive your car, the Single Chain Gears Necklace brings the perfect touch of Steampunk to any occasion.