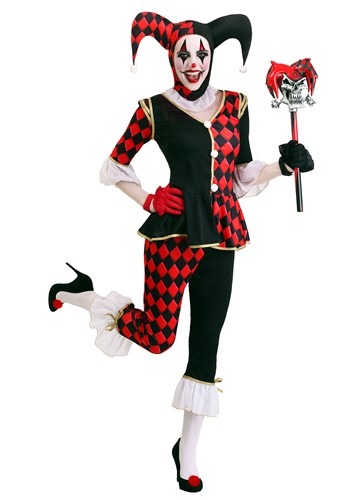 Culturally, we've developed just a hint of a phobia regarding clowns. The mere mention of them brings to mind all sorts of possibilities.  Will they jump from dark corners to pull off a witty practical joke? Or will they pull out a weapon that's clearly been used to eviscerate the neighbors? That's quite a big difference, especially when both types of clowns typically look exactly the same despite their vastly different personalities and skill sets!

But, that makes us look a bit further back at a type of clown that existed in more regal days. What about the harlequin who performed for the monarchy, whose feats were more acrobatic and romantic in nature? Whose slapstick was a wand used to change the scene of a play rather than the rolling oafish physical comedy that the clown would one day steal? Of course... as an actress, could not the refined harlequin merely be staging a regal self while waiting to unleash horror?

Imagine it is the 16th century and you're ready to put on a magnificent performance. Or imagine it is contemporary times and your beloved Jokester is ready to unleash a devious plot. Whichever tale you wish to tell, our in-house design team has ensured that this Regal Harlequin costume will make your act sublime. The pants and top of this royal look feature the iconic black and red diamond pattern with gold trim and bow details. The jester hood has hook and loop closure with a chiffon ruffle at the neck. All you need now is the wand and the stage!

The key to making a convincing harlequin is knowing when to unveil the final line. And, then, decide if it is going to put a smile on your audience's face... or if they'll ever recover from the shock! It's up to you in this Harlequin look.