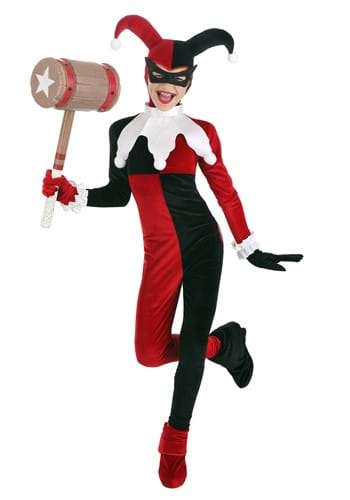 Harley Quinn marches to the beat of her own drum. And that drum? It's being played with an oversized hammer instead of a drumstick. (She's a big fan of hammers.) She spends her days adding some chaotic vibes to Gotham City and you never know what to expect with her. One day, she might be saving the city from a criminal mastermind, and the next day... she might BE the criminal mastermind causing trouble! She might give Batman a headache here and there, but she's a staple figure in the DC universe!

If your child has a chaotic nature, just like Harley Quinn, then perhaps it's time for her to wear the uniform! This officially licensed costume turns any young mischief-maker into the iconic character from DC Comics.

This Deluxe Harley Quinn Costume is a child-size version of her classic outfit, which first debuted in the animated Batman series from the 1990s. The costume beings with a black and red jumpsuit, complete with diamond patterns on the legs. The matching gloves and boot tops help continue the red and black theme. The white cuffs fit around your child's wrists with elastic and the oversized collar helps give your child that comic-style appearance. The finishing touches to this costume come in the form of a harlequin hat and a black eyemask. Put it all together and your girl will be ready to cause some mischief in Gotham City.

Your girl will feel right at home in this Harley Quinn Costume. Just don't be too surprised when she asks to get a pair of hyenas for pets. Want to join in the fun? Then just check out our other Batman villain costumes. With styles based on Poison Ivy, Catwoman, and plenty more, you can create your own team of supervillain!