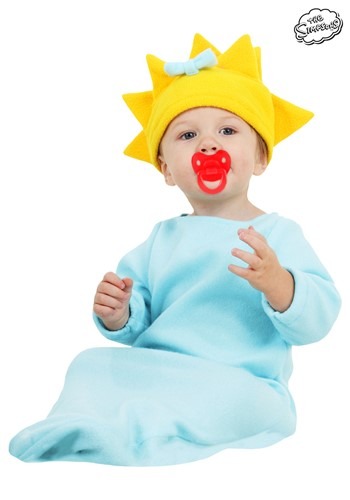 Margaret Evelyn "Maggie" Simpson might be the least seen and heard in the Simpson family, but she’s arguably the most mature member of the clan, and perhaps the wisest. The fact that she rarely talks doesn’t mean she can’t - sometimes, she just has better things to do. Like, for instance, showing up in Bart’s nightmares, dominating Lisa at fencing, saving her father’s life (twice! First from drowning and again from a mad tow truck driver), planning a Great-Escape style breakout from a daycare center just to get her pacifier back, and twice attempting to shoot Mr. Burns (once when he tried to steal candy from her, and another time just because she saw her chance and decided to take it).

Which is all to say - don’t even think about trying to pull a fast one on Maggie, or you’ll get the fast one pulled on you. In fact, we suspect that Maggie only keeps her intelligence a secret just so she can continue to get babied by Marge. Which, we gotta admit, is pretty smart!

So if you suspect that your own little rugrat knows a lot more than she's letting on, dress her up in this officially licensed Maggie Simpson Costume! The fleece dress will make it impossible not to baby her, but the yellow fleece headpiece with a blue bow attached will remind you that she's taking in every single one of your family's shenanigans. Just don't forget to add a pacifier, or you're likely to have a full-fledged guerilla-style revolt on your hands!

Product Reviews       Write A Review6 Total Reviews
Five Stars
By Homer / November 19, 2018
Loved it! My daughter's first Halloween costume was a success.
Was this review helpful to you?YesNo