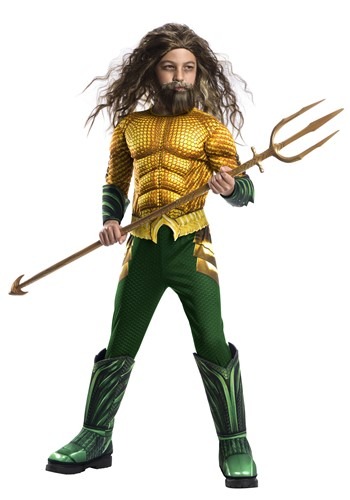 Is your kid ready to jump into the rip-roaring world of DC Extended Universe? Alright! Sure, he's probably familiar with the classic characters like Batman and Superman, after all, they've been on TV and starring in movies for years. But, now, new flicks from Warner Bros is making a big splash, and we're getting familiar with characters who've been famous in comic books for a long time. Wonder Woman (obviously) but also Cyborg, the Flash, and especially, Aquaman!

If your kiddo's a fan, we're sure they're going to be ready to suit up as Aquaman. Jason Momoa's portrayal of the superhero makes Aquaman out to be one cool dude, and if your child is ready to get ocean powers and superhero swagger, well, we've got just the thing for them. This officially licensed Child Aquaman Costume captures the style straight from the 2018 Aquaman movie, and it's ready just in time for Halloween.

This Aquaman Child's Costume is DC Comics and Warner Bros officially licensed. It comes with a fully printed polyester jumpsuit. The printed details depict the tattooed torso of Aquaman and a shoulder guard, straps, and gauntlets. The lower half has printed pants and boots, and they have a boot cover section that covers any kind of shoes and secures under the foot with an elastic band. A belt secures around the waist, and all pieces secure with hook and loop fastener strips.

Ready to Save the Day

While we dabble in fantasy and comic books and love to imagine the action is real, we know full well that we can't send out superpowers with each costume we ship out. We sure wish we could! We're sure your kiddo will love imagining themselves as a Justice League hero, though, so be sure to pick out this costume or one of our other choices, and we're sure they will be ready to save the day!