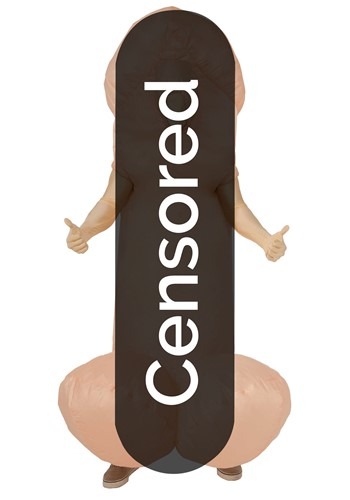 So, you've been invited to the annual 'Adult Humor' party. There are always some pretty inventive costumes at such a gathering. Play-on-word costumes are a standard. You can probably expect a couple of sausage-related costumes and at least one crop top that features enormous fruit along the bustline. You know there will be the Plug & Outlet couples' costume featured at least twice. (Probably more.) Each of them fully deserve the wry chuckle for the pinnacle of suggestive humor.

But, if you want a real reaction, you have to go all the way. Who needs an implication when you can just show up in the full glory that is the theme of the gathering? Folks might stifle a laugh as they ask which way you lean... but you can turn those giggles into a full uproar when you show up, fully loaded, in a costume that hides behind nothing!

We have to be frank. If you want the most outrageous costume for your adult humor party, it's time to go for the gold. It's time for the Giant Inflatable Penis costume. There's no bones about it. This costume looks like a giant penis. When you slide into the costume and secure your arms and ankles, turn on the fan and your costume will fill up with air! Maintain vision through the mesh mask, even if your stride may be restrained. In no time, you're ready to waddle into the room and let folks go nuts with laughter at your undeniable stones. A costume like this takes... guts, obviously!

Is That a Costume in your Pocket?

The jokes will practically write themselves when you wear this most direct of adult humor costumes. Flip the switch and bring your Inflatable Penis costume to life. All that's next is figuring out where to wear your crown for winning King of the Costume Contest!