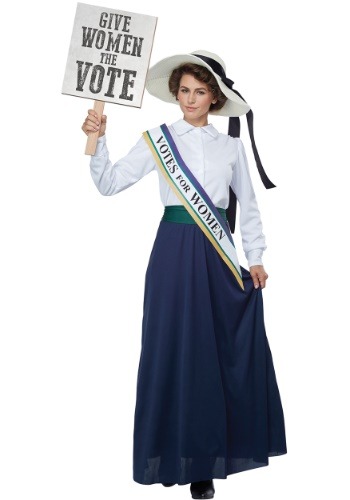 Battle for the Ballot

The road to getting a vote for women wasn't a smooth one. Which is strange, considering how ridiculous some of the arguments for keeping half the population from having a say in politics were. People used to argue that the human race would die out as soon as the government gave women a political voice. Because for some reason, getting involved in politics would make every woman decide to leave motherhood behind forever. Many men stood against the vote because they didn't want to hear ladies speak in public places. But, with years of protests, hours of women annoying their husbands by speaking in public, and whittling away at the voting laws state by state, women finally earned their voice. Celebrate those brave ladies with this Woman's Suffragette Costume!

You'll look ready to hit the streets in the early 1900s with this sleek ensemble. This costume comes with a dress that's designed to look like a blouse and skirt; the long-sleeved collared top and floor-length skirt would be perfectly acceptable in the political salons of all classes. A green band cinches around the waist, and of course, a sash is worn over the shoulder to denote that you are a part of the women's suffrage movement.

Power of the Past

Forgetting the past is a dangerous thing. We can't forget a time when people would say a thing like, "Why would women want to vote when their husbands and sons could speak in their interests anyway?" It seems that after about a hundred years of woman voting, none of the Victorian arguments had much merit. And women definitely have the right to speak in public nowadays. In fact, to the probable shock and horror of nineteenth-century men, they even run countries and sit as judges on the supreme court. Seems that politics could have used a woman's touch a long time ago!