Dolled Up Flapper Costume for Women 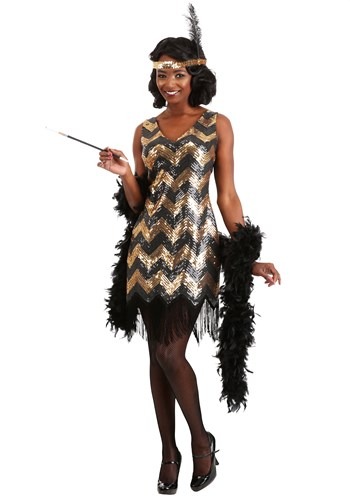 A Century of Shimmy

Before the twenties came along, the most scandalous dance out there was the waltz. What two people together trotting to 1, 2, 3s? The audacity! But once the twenties were in full swing, jazz music began to spread and hemlines started to rise, ensuring that, when it came to having a good time, the world would never be the same. Since then, we've been having so much fun. We've been Jitterbugging, Lindy Hopping, Hand Jiving, Twisting, Hustling, Moonwalking, and Electric Sliding through the decades. And while the almost cartoonish moves of the Charleston might not jive on the dance floors of today, we have to hand it to the twenties, they started a party that nothing could stop!

Our creative team designed this flapper dress to pay tribute to the fabulous fashionistas of the 1920s. The cut isn't formfitting as is typical for the 1920s cut. The entire dress is layered in gold and black sequins in a Chevron pattern and has a dramatic fringe hem. The dress zips up the back so that you don't have to mess up your bob when slipping into it. The ensemble is topped off with a gold sequined headband with a long, black feather. Complete this look with character shoes, fishnets, long silky gloves, and a sassy attitude and you'll be ready for the speakeasy!

Now that a century has gone by, we're so glad that shimmying is still in. Are you ready to embrace your own brand of flapper? This costume isn't limited to Halloween. The roaring twenties make a great theme for bachelorette outings, birthdays, graduations, and holiday parties. Shimmy into this look and you'll be ready for whatever dance craze comes next. Because if there ever was a style that's dance party ready it's the flappers of the 1920s!