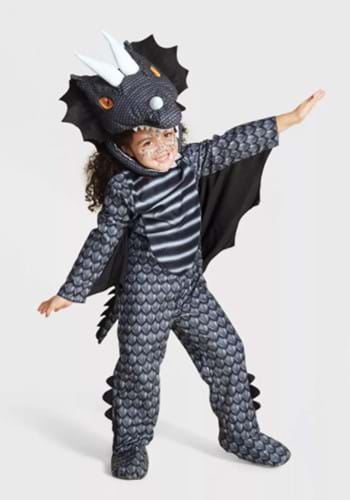 Take to the Skies!

Does your child have a love for animals, but prefers them bigger and bolder? Maybe she thinks puppies and kittens are a little too tame, and prefers something with larger teeth. Perhaps eagles are ok, but she'd rather have a pet of more mythical proportions - a lion-tailed, steely-eyed griffin, for instance. Why stop there, though? If she's really in the mood to dream, she'd like a scale-studded, fire-breathing dragon. Better yet, she'd like to be the dragon herself! And keep a puppy as a pet.

Drama, mystery, animal love - this Dark Dragon Toddler Costume has it all! Your child will be so excited to slip into the scale-patterned jumpsuit and pull the elastic boot covers over her feet. The pants have spines on the outside of each leg for a fearsome appearance, while the striped underbelly fabric provides some whimsy. Scalloped wing insets are sewn to each sleeve and they flap impressively whenever your child moves her arms. A spiny tail sewn to the jumpsuit's seat swishes back and forth when she wiggles around. The stuffed hood looks like an open-jawed dragon - your kid's head peeks out of the mouth, surrounded by pointed white felt teeth. Dark frills, two white horns, fiery dragon eyes and a cute nose round off the hood's details.

This mystical creature can be ferocious at times, but is always up for a good cuddle! The neighborhood is lucky to have such a cool dragon flying around when it's time to trick-or-treat.