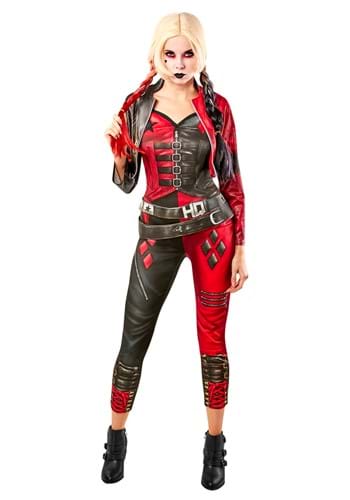 Some heroes pick a costume and stick with it. Take Batman for instance. That guy has had the same boring old suit over so many years. Sure, he makes some minor changes here and there, but it's always bat ears, cape, and dark jumpsuit. Harley? Well, she likes to mix it up! When she's heading on a brand new mission, she wouldn't be caught dead wearing the same old thing. In The Suicide Squad, she's sporting a look inspired by her classic outfit, but with a deadly and rebellious spin!

This officially licensed Harley Quinn Suicide Squad Costume captures her signature style from the movie, so if you're planning on causing a little mayhem or you want to team up with a mutant shark, then this is THE outfit.

This costume is inspired by Harley Quinn's main look from 2021's The Suicide Squad. The costume begins with a step-in sleeveless jumpsuit that has the classic red and black color scheme from Harley's early days. The top portion of the jumpsuit is designed to look like a corset, while the bottoms resemble a pair of biker pants. It even has printed diamonds, zippers, and straps to give it an authentic look. The foam belt fits around the waist and has a printed buckled in the front. The finishing touch to this costume comes in the form of a cropped jacket with long sleeves. The jacket has a faux leather look and will help you slip into true Harley style!

If you want Harley's new look... or if you want to join up with The Suicide Squad for a bit of mayhem, then this costume is what you've been searching for! Of course, just make sure you pair this up with a few of our toy weapons, because Harley never leaves how without packing a few surprises!