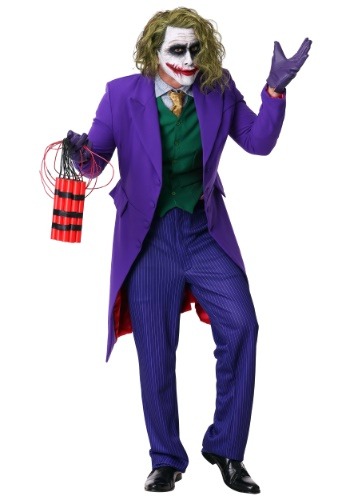 When Batman began cleaning up the streets of Gotham City he was willing to fight anyone who stood against him and do whatever it took to keep citizens safe. And, honestly, he got off to a really good start.

He easily took down the mob, who were only interested in money and power, but how do you fight someone who just wants to watch the world burn? That's the problem Batman faced when The Joker showed up on the scene and changed the rules. The Dark Knight's most famous arch-nemesis loves nothing more than spreading chaos and causing Batman as much pain as he can in the process. Though we hear he also likes gunpowder, gasoline, and can do a really cool magic trick with a pencil!

Feel like spreading a little chaos of your own? This Grand Heritage Joker Costume will give you everything you will need to put Batman through his paces and whip Gotham into a panic. This officially licensed costume includes a long purple jacket, pinstripe-patterned pants, green vest, dress shirt, and tie that have all been designed to capture the details of the outfit worn by The Joker as he terrorized the city in The Dark Knight movie. It also includes a green and brown colored wig and makeup set, which comes with prosthetic scars just like the ones The Joker had around his mouth, but you can come up with your own story of where you got those scars. If you haven't started practicing your maniacal laugh yet, then ask yourself: Why so serious?