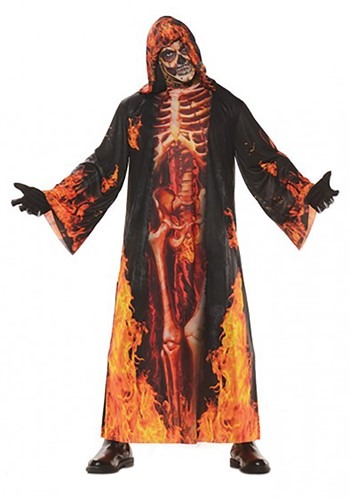 Living in the Underworld

The underworld doesn't seem to be a pleasant place. In just about every form of literature and classic mythology, the underworld is the place where demons and wicked dead souls end up. Usually, it's ruled by some nasty jerk, like Hades. Oh, and there's fire there. Like, a lot of it. It really doesn't sound like the place that most people would want to visit, but if you want to scare the bejabbers out of someone, then dressing up like a resident of the underworld is a pretty sure bet.

So then, if you're trying to dress up like an underworld inhabitant? First, it'd be best if you were on fire... but that's really dangerous and we can't recommend that sort of thing to anyone. Second, it's a good idea if your skeletal system is visible! Everyone knows that the mere sight of a skeleton reminds us all of our mortality! Well, the great news is that this Men's Underworld Robe Costume accomplishes both with relative ease!

This underworld robe costume gives you a creepy look that combines a blazing look with the creepy style of the human skeleton! It's a black robe with vivid printed details, like plenty of orange and red flames, along with a human skeleton in front. The robe also has an attached hood, which you can flip up for the ultimate freak factor! When you have it on, you might even be ready for a trip down the River Styx!

If you want to bring the underworld to Earth, then it's time for this fiery and freaky robe! You can wear it with your normal clothes or pair it up with one of our scythe accessories to create your own Grim Reaper costume!