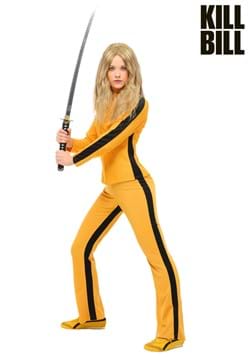 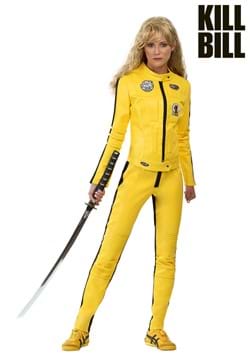 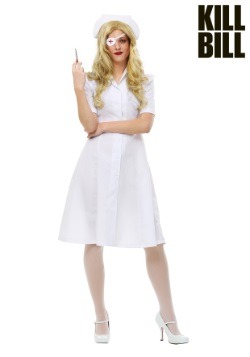 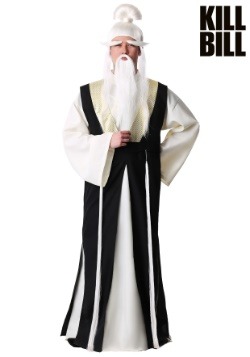 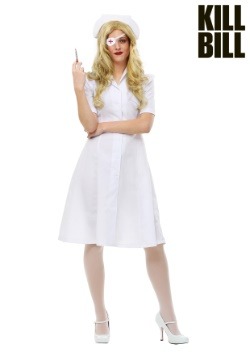 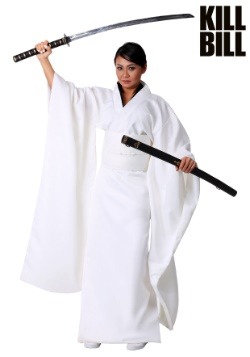 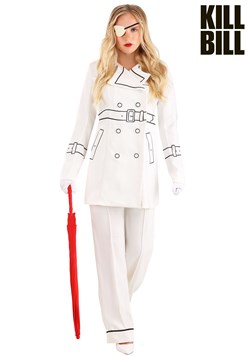 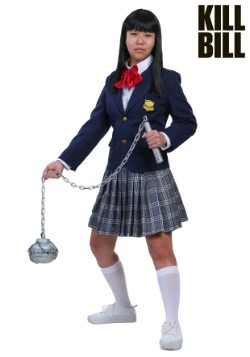 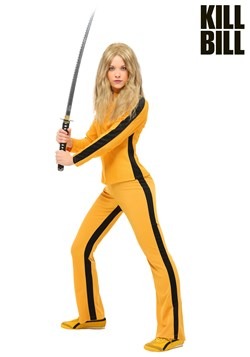 We don't really condone violence unless it's in the kind of high-octane sword-fighting action scenes that Quentin Tarantino features in his movies. The scene where the Bride (Beatrix Kiddo) crosses katanas with each member of the Crazy 88 in a row? Mind-blowing! Or how about that fight between Beatrix and Gogo Yubari? Craziness! And the costumes? Get outta here! Of course, we decided to put our love of the movie to good use, by making a whole line of super awesome costumes based on the classic action movie. We spared no detail in creating some of the best costumes based on Kill Bill characters!

These Kill Bill costumes include everything from Uma Thurman's signature yellow jumpsuit to her biker jacket that she wore while tracking down O-Ren Ishii. We also carry costumes so women can transform into the devious deadly villain, Elle Driver. Or, if you're feeling like mixing a bit of cute into your dangerous essence, our Gogo Yubari costume turns you into the deadly chain-mace wielding assassin from the Yakuza. We also carry toy weapons based on the ones used by the main characters, like the Hattori Hanzo sword and the meteor hammer. All of our costumes are licensed from the movie and fully made by us, so we stand by their quality 100%.

Nothing could prepare audiences for the action-packed thrill ride that Quentin Tarantino unleashed upon the world in 2004. Then, he followed up with the bloody sequel with a Kill Bill Vol. 2, which finished the Bride's tale in a spectacular fashion. Of course, fans have been clamoring for more, even over a decade later. It's no surprise that Kill Bill costumes are as great of a choice today as they were when the movies first came out, especially at any sort of cosplay event!

The great news is that we have made our own line of exclusive costumes and we've even made a full batch from the Kill Bill movies, including some of the most popular characters from the film. This quick little guide will highlight some of the most popular characters and costumes, and it should help you decide which costume is the right choice for you. We'll also show you a few toy weapons and accessories based on the movie, so you can perfectly accessorize your ensemble to look like you stepped right out of the movie.

The highlight of any Quentin Tarantino movie is, of course, the wild and interesting characters. From Pulp Fiction and Reservoir Dogs to Hateful Eight, his movies contain some rare windows into the lives of strange and extraordinary people. Kill Bill is no different. It looks into the lives of a group of assassins trained in the deadly art of swordplay… and that makes for one heck of a movie.

Which character best fits your look and personality though? Are you a Black Mamba kind of person, or are you more of a California Mountain Snake? Maybe you're no Deadly Viper Assassination Squad member at all! Maybe, you're a little more on the unpredictable side, like Gogo Yubari. Well, whichever category you fall into, you can find your costume below. 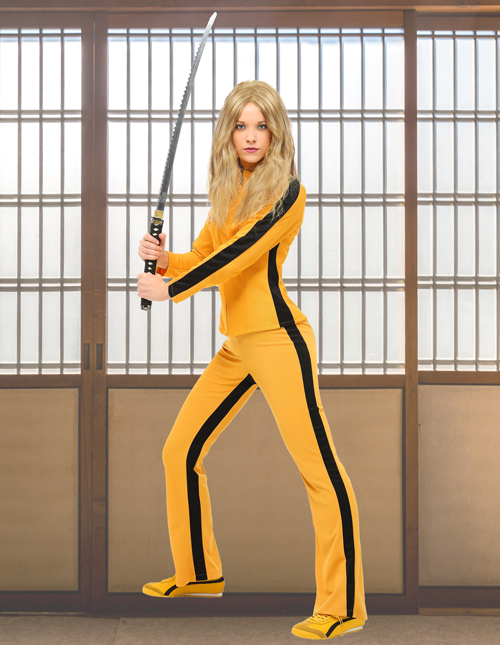 Of course, we must begin with the central protagonist of the movies, Beatrix Kiddo (spoilers, sorry), more commonly known as The Bride (not just A bride but THE Bride). Her tale is a tragic one! She merely attempted to quit her job to have a child with a run-of-the-mill kind of man, only to have her wedding interrupted by her ex-associates. Of course, you might have to expect that when your former line of profession lies in assassination! She uses nothing but her elite ninja skills to wreak havoc upon the Deadly Vipers Assassination Squad and eventually gain her revenge. If you're a tenacious woman with some crazy ninja skills, then this Beatrix Kiddo costume might just be the look that's perfect for you. 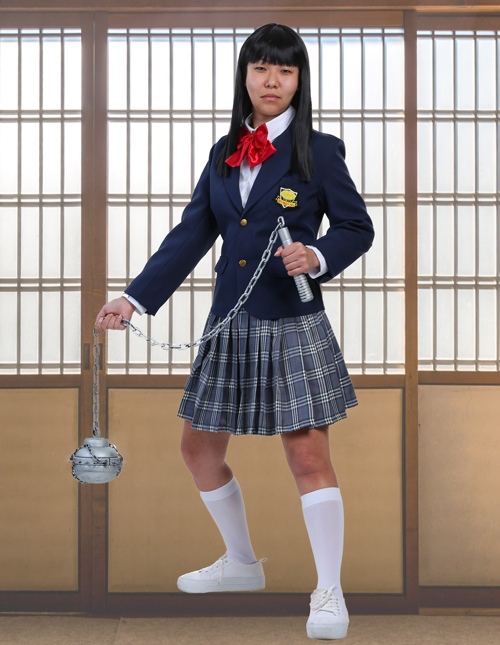 Gogo Yubari is a little bit unhinged, but you have to respect an unpredictable girl who wields a meteor hammer with deadly accuracy like her. She's O-Ren Ishii's right hand girl and she doesn't play around (despite the fact that she wears a school girl outfit). If you're the cute-but-dangerous and totally unpredictable type, then you might want to consider dressing up as Gogo. This officially licensed Gogo Yubari costume is a simple school girl style outfit, but it comes with small details from the movie, like a school crest on the jacket and a plaid skirt that matches the one from the film. 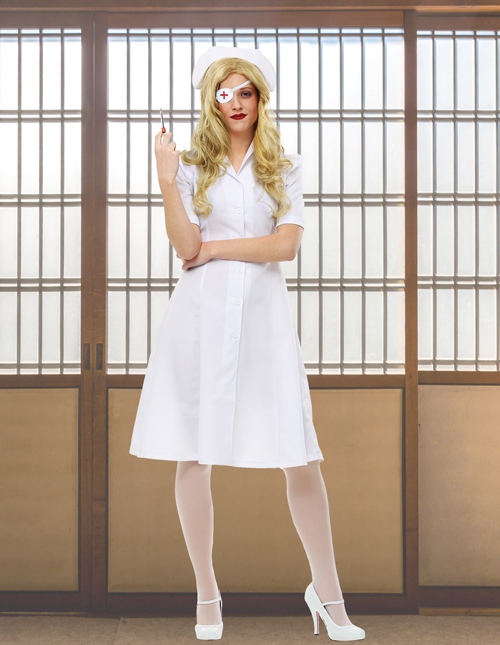 Few women are as cunning and deceptive as Elle Driver, known as the California Mountain Snake in some circles. She's a master of the sword, but she prefers more sneaky methods of fighting her foes. She even attempted to finish The Bride off once and for all while she lay in her hospital bed. She's definitely a cut-throat kind of woman who does whatever it takes to get what she wants. If that's your kind of style, then maybe you're an Elle Driver kind of person. This Elle Driver costume recreates the outfit worn by Darryl Hannah (you might remember her being a mermaid in the 80s) from the early scenes of Kill Bill Vol. 1. It's a simple nurse costume with a pirate-style eyepatch to enhance your deadly style. 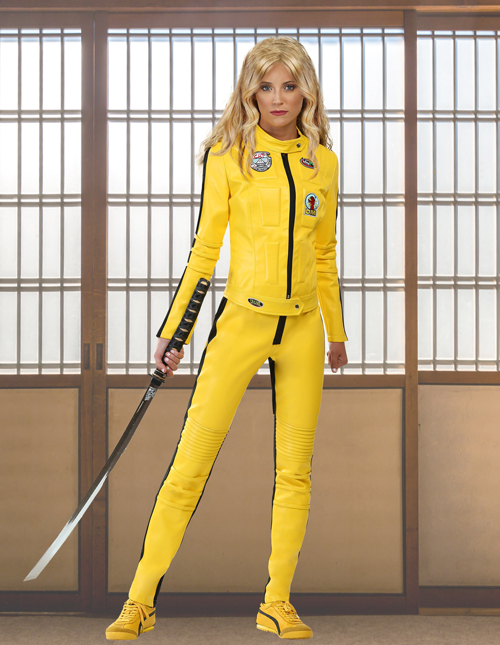 If ninja skills weren't already cool enough, The Bride is also quite skilled at riding a motorcycle. She tracks down the Crazy 88 gang while riding her yellow bike and she's definitely dressed for the occasion. She wears a stylish yellow motorcycle jacket that matches her bike and her Bruce Lee inspired fighting outfit. If you want to recreate that rebellious look, then you're going to want this Kill Bill motorcycle suit. It comes with a faux leather coat and a matching pair of pants to help you look like the most stylish assassin around.

From the days of knights and wizards who wielded mighty weapons like Excalibur, to video game series like The Legend of Zelda with the Master Sword, Kill Bill continues the long tradition of mythical weapons. The Hattori Hanzo sword represents the pinnacle of sword craftsmanship in the film. It's a pretty big part of the mythos that surrounds the characters in Kill Bill. That's what you'll find among our selection of Kill Bill accessories—replicas of mythical weapons and a few wigs to give you the look and feel of the skilled martial artists from the film. 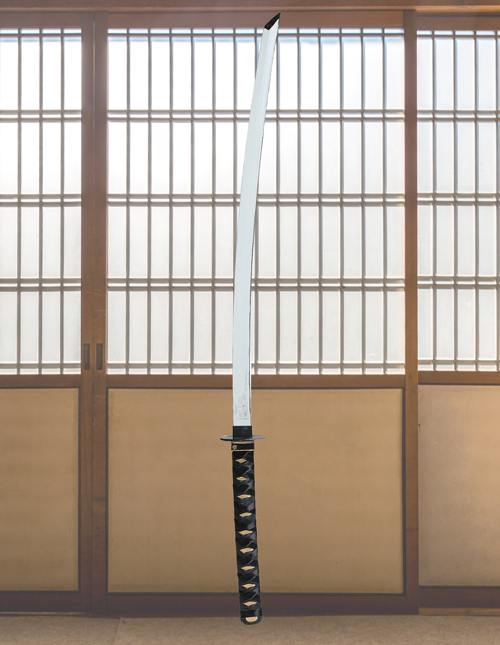 We all have a pretty good idea of just how awesome the katana is. Famous samurai from the old days of feudal Japan, like Miyamoto Musashi, wielded them in battle and so did the highly skilled ninja like Snake Eyes from GI Joe. It's certainly the weapon of choice for many warriors, so it's no surprise that the katana is her favorite as well. Of course, anyone who's watched Kill Bill knows that Hattori Hanzo makes the best swords in the world, and lucky for you, we have this toy replica Kill Bill sword. It looks just like the one from the film, but it's made out of plastic and doesn't have an edge, so you don't have to worry about accidentally cutting anyone with it. 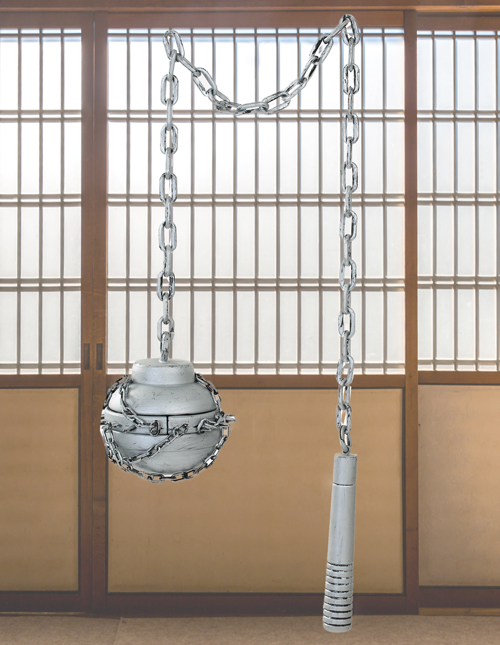 Some people call it a chain mace, but all the cool kids call it a meteor hammer, because it sounds way cooler. Although Gogo Yubari is quite skilled using many different weapons, the one she decides to use during her fight against Beatrix Kiddo is this little beauty. It's one scary and dangerous weapon, so it's a good thing that this Gogo Yubari chain mace is just a high quality toy weapon. Don't bring it with you to any duel you might have scheduled, but you'll definitely want to bring it with you when you head to your next costume party! 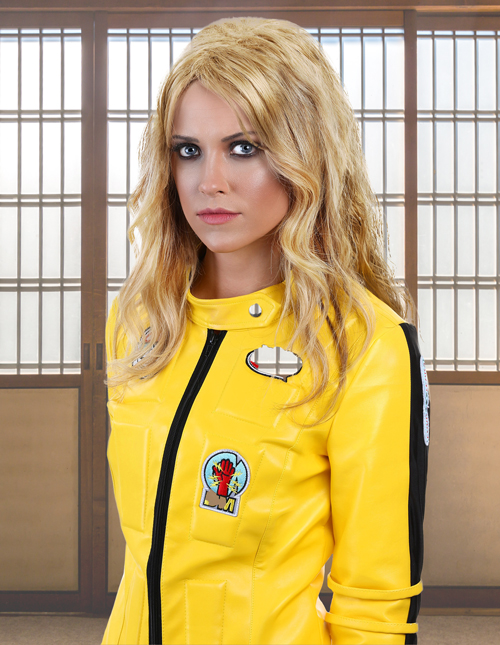 Not all of us can be blessed with the lovely blonde locks of Uma Thurman. It's not quite the hairstyle of traditional samurai, but her character, Beatrix Kiddo, is hardly a traditional kind of sword master. The good news is that this officially licensed Kill Bill wig accessory helps you get the look of Ms. Thurman. It's a simple wig that fits with an elastic band, so you just simply put it on your head and you'll look like a deadly blonde assassin with some serious katana skills. 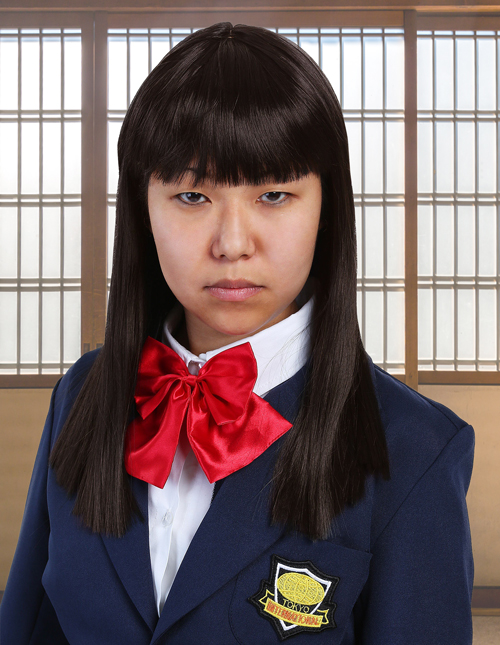 If you plan on dressing like Gogo Yubari, you'll be spending most of your time practicing some really killer martial arts moves to use against your enemies. What time you have left, you'll most likely be using to come up with some witty banter to say to The Bride when you finally meet her for the final duel! You definitely won't want to worry about what your hair looks like. That's where this licensed Gogo Yubari Wig comes in! Just wear it on your head and you can be confident about your hairstyle as you swing around your meteor hammer. 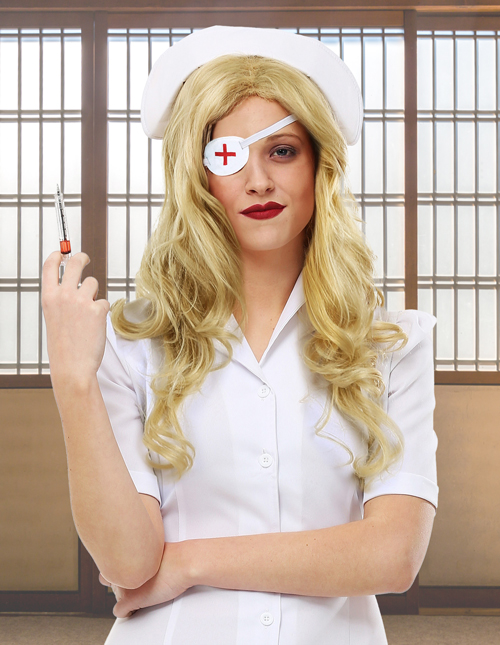 They say that blondes have more fun… but that probably doesn't apply to Elle Driver. We're not entirely sure if that woman has ever had any fun, since she's a cold-blooded ninja assassin who'd cut you down with her sword just as soon as look at you! If you want that kind of look (deadly assassin look), then this Elle Driver wig will be perfect for you. It's one of our many wigs and it should have you looking like Daryl Hannah in no time. Oh, and don't worry: you're totally allowed to have all the fun you want while wearing it. 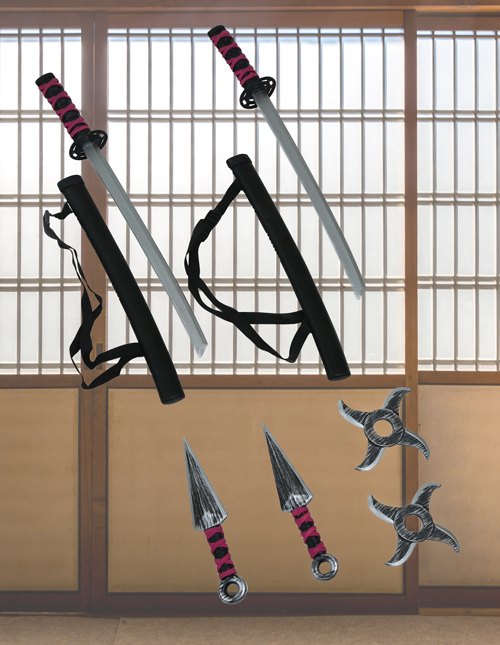 Is one samurai sword not enough to sate your need for martial arts weapons? Well, perhaps it's time that you collected a whole arsenal of toy weapons to exact your revenge! Although Beatrix Kiddo's primary weapon was a katana, we have to imagine that she's also quite proficient with many other weapons. After all, just watch her epic fight against Vernita Green. This ninja weapon kit is an exclusive accessory set that will have you feeling quite prepared for any kind of situation you might find yourself in.

O-Ren Ishii was a pretty big deal in the movie. Not only did she seize full control of the Yakuza, but she also employed a sizeable gang of the best fighters around. The Crazy 88 consisted of various swordsmen of skill, but according to Bill, there probably weren't a full 88 members. There may have only been around 40 members. Also, Tarantino may have been making a musical reference with their name and style, as a piano has 88 keys and the Crazy 88 wear black and white, much like the keys on a piano. The good news is that this black-and-white motif and the large number of members in the group make this a fairly easy do-it-yourself costume and it even makes for a great group costume. 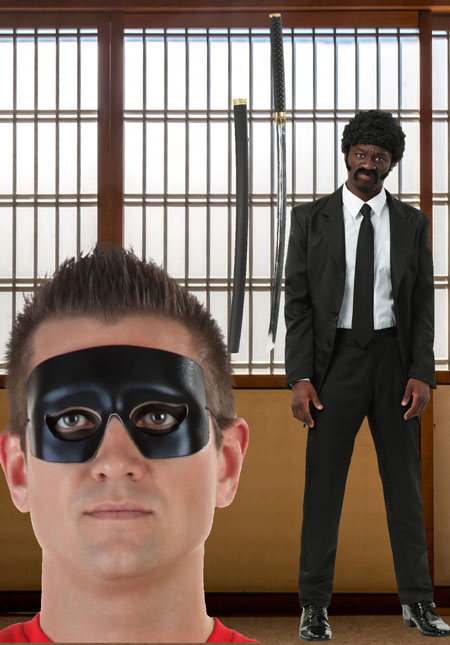 To make this costume, all you'll need is a few items. First, you'll need a black suit. We happen to have one designed for Pulp Fiction costumes, but since it's a basic black suit, you can use it here. Next, you need to recreate the mask. Each member of the Crazy 88 wears one of these black eye masks in Kill Bill Vol. 1, so wearing one is essential. That look can be achieved with this black eye mask accessory. Lastly, you're going to need a sword. The members of the Crazy 88 are known for their skills with a blade, so you'd better be packing a sword. Our officially licensed Kill Bill sword works well, as do many of our other toy swords. It's really all about selecting a sword that suits your own personal tastes. Once you've put the look together, you'll look fierce and stylish enough to defeat The Bride in 1-vs.-1 combat, or at the very least 1-vs.-88 combat!