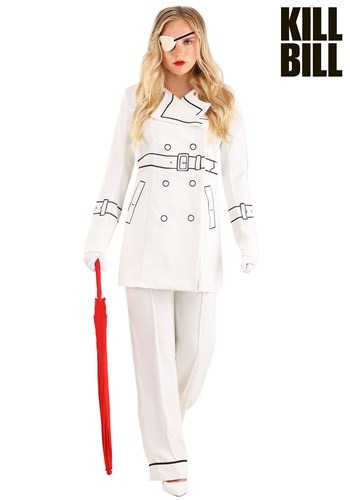 A Woman on a Mission

Elle Driver has some unfinished business. She made an attempt to take Beatrix Kiddo's life, but the lucky bride narrowly escaped the grips of death. Now, she's ready to finish the job and she'll do anything to get it done. If that means dressing up like a nurse, sneaking into a hospital, and whistling an eerie tune as she walks the halls to meet her would-be victim face to face... she'll do it without hesitation. The only thing she won't do is cross Bill!

This women's costume comes a trench coat, a pair of pants, and an eye patch. The white trench coat has black, printed details on the front and back to give it an almost comic book appearance. The white pants fit with elastic in the waist and feature matching black printed details. Finally, the eye patch fits around your head with an elastic band and fully transforms you into the vicious character from the movie. When you have it all on, you'll be ready to walk the path of destruction, just like Elle Driver.