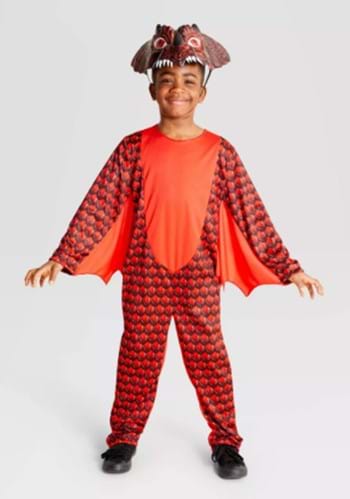 The Friendliest Dragon in the Kingdom

A dark mountain sits on the horizon. Once an active volcano, its hollow inner chamber has become the lair of a fearsome creature. All the townspeople below are terrified that the monster will come down to steal their maidens and eat their sheep, but little do they know that they have nothing to fear. This dragon welcomes visitors and he will happily show them his priceless treasure hoard. It's a little different than your normal dragon hoard, though: Instead of gold coins, gilt crowns and ruby scepters, this dragon hoards chocolate bars, graham crackers, and marshmallows. It's a much more useable kind of treasure, especially when you have toasty warm breath!

Your kid can light up Halloween with this Red Fiery Dragon Costume! The one-piece jumpsuit is patterend with red scales and has a bright red inset on the chest like a dragon's smooth underbelly. The wings are sewn into the side and sleeve seams so they flap anytime your child moves his arms. The dragon headpiece has fierce eyes, a dragon's snout, and sharp-looking white teeth, as well as horns and dragon frills for extra realism. It sits on top of the head like a hat and stays in place with an elastic strap under the chin.

Dragons are fearsome creatures, but they can actually be quite fun to be around. When they're not jumping off the couch in an attempt to fly and zooming around the house pretending to eat would-be knight heroes, they like to go trick-or-treating with their friends and family. Fortunately, this dragon is conveniently sized so that he doesn't take up the whole sidewalk!