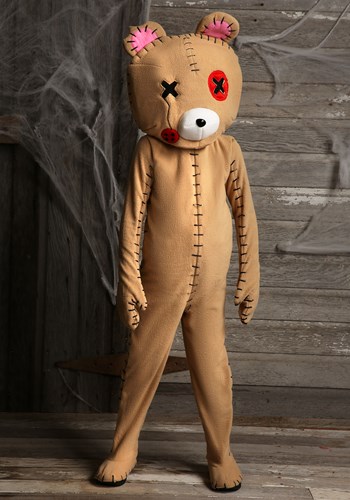 Every child seems to have that one plush toy that looks like it's seen war 20 times over. The once fluffy hair is matted. The seams are coming apart. If either of the plastic eyes is still hanging on, it's by one lingering fiber of thread (a miracle really). After a couple of intense reconstructive surgeries to reattach a torn limb and several wash cycles the lifeless looking thing actually seems to have a presence that you can't ignore any longer. Its lazy posture and faded eyes seem to watch you whenever it's in the same room. You're not proud, but whenever you catch a glimpse of its dingy form, you get the creeps. You've considered sending it to a shallow trash grave, but you're not convinced simply throwing it away would permanently rid your house of its existence.

You've seen the way your child cuddles with the monster of a plaything. You've heard some of the strange, one-sided conversations they've had with their bear. What if, even after you watch the garbage collectors empty your bin, the discarded bear wound up on your front step?

Everyone's favorite nightmare comes to life with this exclusive Lifeless Bear Costume. From the depths of your trash bin, this plush bear will spook even the sturdiest of characters. With it's stitched up limbs, it looks just like your kiddo's threadbare stuffed animal. While your child is enjoying some innocent trick-or-treating, the full mask will really make an impact with its soft-sculpted ears and appliqued eyes as it strolling down the street.

Night of the Living Teddies

This Halloween let your kiddo take on the same creepy persona as their favorite, worn-out teddy bear. They'll be a wild combination of spooky and sweet in this Made By Us Bear Costume. With any luck, your little one will be so convincing as a lifeless bear, that any uneasy feelings about the teddy bear in their bedroom will fade away.