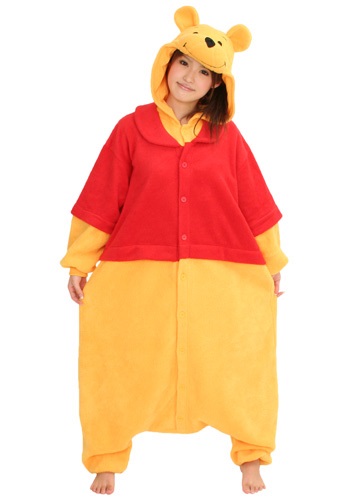 Are you friendly, considerate, and loyal? Are you fond of food (especially sweets)? Do you feel like a kid at heart? Do you wish you could wear pajamas to a party and pass it off as a costume?We think we have just the thing you, hunny.

Arrive at your best pal’s party wearing this Pooh Pajama Costume and bearing a simple gift: a useful pot to put things in. Your pal may be a bit of a downer, but even he will perk up at your playful image. And remember, you tend to be a bit forgetful; so if you misplace any “hunny” or even your best pals Christopher Robin or Piglet at the party, all you have to do is think like your favorite bear and take a nice little nap on it. By the time you wake up, you may be none the wiser, but you'll be all rested and cheerful, and that always makes Pooh Bear feel better.

We think this clever costume may have been thought up by Pooh himself. An adorable look that’s both officially licensed and officially cozy? Even Eeyore would muster a positive attitude about that. Just slip into the soft, button-front pajama jumpsuit that comprises this look, and pull up its attached Pooh Bear face. No one will mistake your likeness, and you can slip into bed at the end of the night and drift off into honeyed dreams.