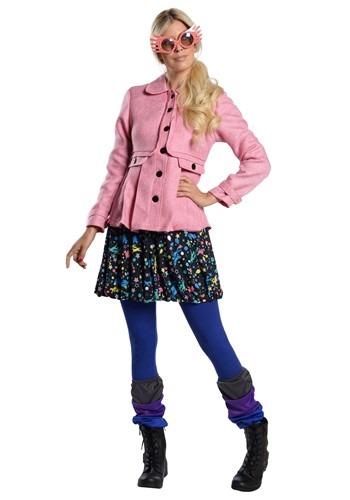 The wizarding world is full of a bunch of spellcasters who seem to spend most of their time trying to come up with charms that make them look far more awesome than they truly are. We can turn to a certain blonde Ravenclaw named Gilderoy Lockheart to get a little hint of how much magic can go to someone's head... (darned charlatan and his Obliviate memory charm)! In fact, it seems like the ones less likely to talk about themselves are the real masters of magic.

Take a true Ravenclaw, for example. Luna Lovegood talks barely over a whisper and is far more interested in talking about the mysterious creatures that live in the wizarding world rather than anything that she's ever done. But, take one look at her report card and you'll see that this bright gal can master a Patronus charm with rabbit-like speed and can even go head to head with Death Eaters while casting charms without even speaking! Now, that is impressive!

Channel the unique style and awesome might of, objectively, one of the best wizards that ever took up the Ravenclaw robes when you hop into this Luna Lovegood costume. This is an officially licensed look based on her casual attire from Harry Potter and the Half-Blood Prince. The complete ensemble includes her pink jacket, colorful skirt, black and purple leggings, ruffled socks, and her prized Specrespecs so you can spot all those invisible magical critters!

Naturally, when you are in this iconic Luna Lovegood look, you'll be filled with the inspiration of this Ravenclaw wonder. You'll have no trouble pulling off all the incantations you know (and can even cast some wordlessly if you happen to forget them). Just make sure you're nice to all the magical creatures that come to befriend you.