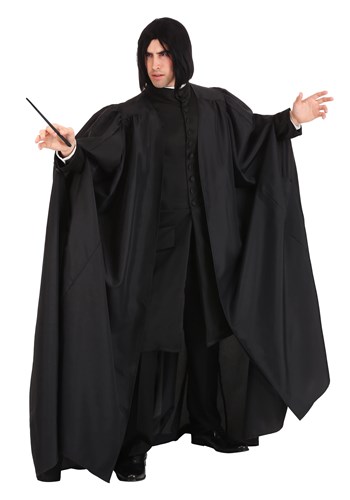 Many wizards have explored all sorts of magical ways to uncover an immortality charm. It's pretty natural to fear death. (Heck, some of the most powerful wizards out there tried to trick Death, himself!) The problem is that such magic is super risky. Folks have turned themselves to stone, transformed themselves into really creepy monsters, and let's not even start in on all of the trouble that a certain Dark Lord created with his messing around with Horcruxes.

That's why we really have to give it up to Severus Snape. He's always had a knack for creative curses and signature spells, so if anyone was going to manage a less troublesome path to securing his stay, it would be him! In fact, maybe he did. Really, even after the conclusion of the Harry Potter story, we're still trying to unravel all of his secrets. We can't get enough of Snape. That's probably the true path to immortality, after all.

Bring Severus Snape to life in the best way imaginable when you slip into this officially licensed Deluxe Severus Snape costume from Harry Potter. Our team of Made by Us designers cast everything they could into recreating a look that would leave you spellbound. The tunic and robe combination features a frock-coat front, decorative buttons, and an inner pocket that is perfect for your wand. Keep your collar refined and all you'll need to do is practice that perfect gravely Alan Rickman voice to make everyone scream, "Severus!"

Bring a bit of magic into your life. You don't have to invent mysterious spells to make it happen. Just call out "Severus Snape" and transform into the Half-Blood Prince, himself, with this officially licensed Deluxe Harry Potter Snape costume. Make sure to pick up a wand to keep at your side as well!