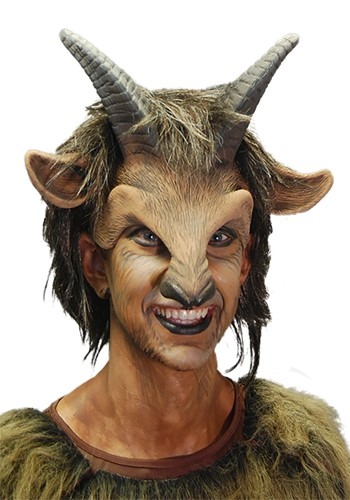 A Flash in the Pan

The Greek god, Pan was a mischevious one. He represented springtime and life. But like all beings that have the energy of new life and spring, he got into a lot of trouble. He was a lowly god and yet he was overly confident, like many other young men you might know. Pan liked to play his pipe whenever he could. He played quite well. So well, in fact, that he compared his flute playing to the lute playing of the great god, Apollo. A contest ensued. He lost, of course, Apollo can't be beaten. While Pan was unaffected, his friend, Midas, who stuck up for Pan's piping was charmed with the ears of a donkey by the mighty Apollo. We have to assumed he didn't mind looking a little more like his animalistic pal. All we know is, that's one battle of the bands we wish we could have seen!

Whether you're looking to dress up as a regular goat or the mischevious god, Pan, you're sure to love how mischevious this goat boy mask looks! The molded mask has the nose, ears, and horns of a goat. It's detailed with thick eyebrows and a hairy pattern throughout for a look that looks right at home in farm or field!