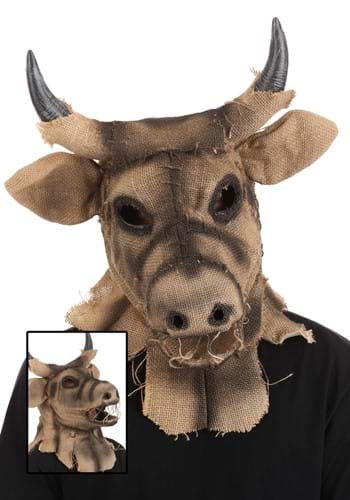 They told you not to go wandering around the farm at night. Sure, it may seem safe enough during the day but they claimed that the country held secrets that a city kid like yourself just wouldn't understand. You followed their advice at first. After a couple of days, though, staying in your room at night with nothing to do was driving you crazy. The night air coming through your window was so fresh...

This eerie burlap bull mask is sure to stir the imaginations of your fellow Halloween revelers! The mask falls around the shoulders and has a jaw that will move with yours as you speak. Dramatic horns crown the top of your head for a show-stopping silhouette. Eye openings allow limited vision, so though this is an awesome way to enter a party, we recommend returning to your human-headed form before walking a long-distance or driving a vehicle.

Long story short, you slipped out of your window and into the moonlit fields. It was so rewarding. The grass was dewy and cool, the moon was full, the crickets were chirping... until they weren't. The silence was sudden. The hair on the back of your neck stood up stock straight. As you turned around, you wished the moon wasn't so bright. There it was, a burlap bull, with an unmistakable look of rage in his eyes!