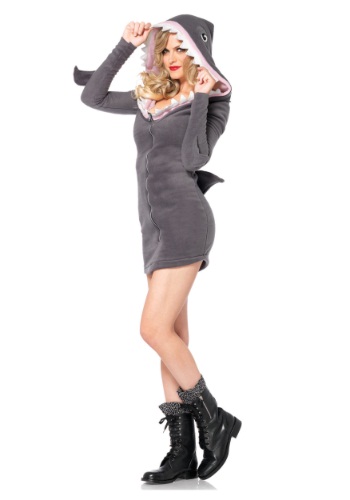 We are long time believers in the idea that sharks aren't bad, just very misunderstood. As giant swimming tanks, built out of teeth, muscle, and more teeth, sharks are basically the exact opposite of cuddly, and whenever they pop up in movies, it's usually to eat some college kids on spring break. Wouldn't it be nice, though, to show some love to these humble ocean beasts?

By showing love to sharks, we aren't saying you should go hug the closest one, because that will probably end badly (and it would be an expensive trip if you don't live near a coastline). But when you sport this Cozy Shark Costume to your next get-together, you can definitely shine a cozier, cuddlier light on these majestic monsters! Just imagine what people will think when they see you wearing this ferociously fun dress. At first, they'll get nervous, because sharks don't normally like to party out of the ocean. Though, once the partygoers realize that you're a friendly shark, and just there to have a good time like everyone else, they'll chill out and be glad they gave a shark a chance!

Besides helping you look like a big friendly fish, this costume is also a perfect mix of cuddly and casual style. The soft hooded mini dress will let the other party guests know that the only feeding frenzy you'll be going on is at the snack table. It won't change everyone's minds about sharks overnight, but you'll make them seem a lot cozier, and that's a good start!