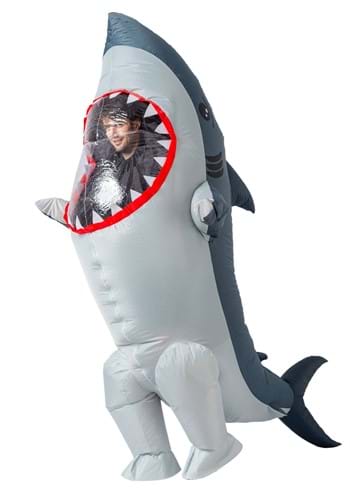 There's lots of kinds of "sharks" you can be in life. A card shark. A pool shark. A party shark (we don't know what that is, but doesn't it seem like something really, really cool?). The word "shark" just means someone who's really astute at a given task. Unfortunately, you don't feel like you're any of these kinds of sharks...yet. But that's all about to change, friend!

Slip into this Adult Inflatable Shark Costume and watch yourself become the ultimate Halloween shark! You'll easily cinch the costume contest trophy, rack up tons of compliments, and make those other animal costumes envy your bold look. Trust us, once you ace one thing, it's pretty easy to ride that confidence boost into the next endeavor. So what's it going to be, next, shark? Will you take on Texas Hold 'Em? Or are you going to hone your shark prowess into something unexpected...Paella Shark? Ukelele Shark? Elliptical Bike Shark? Let's...start with Party Shark and go from there, shall we?

Honestly, there are so few times when people will be happy to be approached by a giant shark, but this Halloween is definitely one of them! When you zip into this jumpsuit, you instantly transform into a Great White shark from fin to flipper. A large transparent cutout in the shark's mouth allows you to see, and the costume comes with a built-in battery pack and a fan for easy use all night long.

People will be talking for many Halloween's to come about this costume—not only because you looked so cool, but also because you were never the same after you found your inner shark! Now you're out there killin' it in life. Bravo!