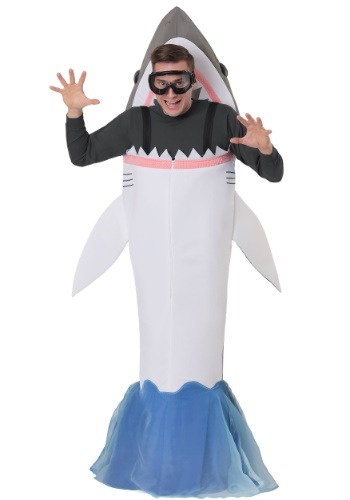 The reality is that in the U.S., only about 19 shark attacks happen per year. And only one death happens about every two years due to a shark attack. So, you’re actually more likely to die from being struck by lightning, or by a coconut falling on your head than you are of dying from a shark attack. But we know another cool statistic! At least 4 out of 5 of your friends will nearly be dying of laughter when they see you wearing this Shark Attack costume for adults!

This Shark Attack costume makes you look like a great white shark is turning you into lunch! The costume comes with a foam jumpsuit that’s shaped like a great white shark. It zips up in the front and it has fins attached to each side. The bottom has a blue “skirt” that’s designed to look like splashing water and the top opening is designed to look like a shark’s mouth. It even has white felt teeth and a pair of bulbous eyes on the head. The costume also comes with a scuba shirt and a pair of goggles to make you look like an innocent scuba diver!

Performance of a Lifetime

While most people will never experience a real shark attack (thank goodness), this costume gives you the chance to look like a poor beach victim! Before slipping into this costume, you’ll want to make sure that you practice all of your “I’m getting attacked by a shark” faces, since half the fun of this costume is really selling it to your friends and family!