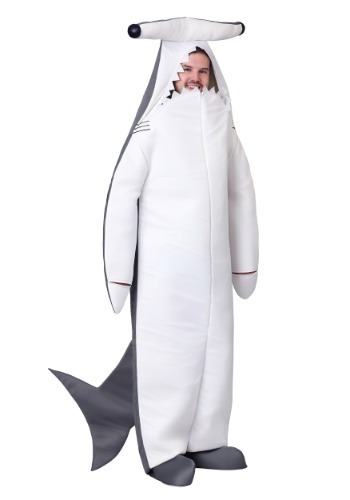 Hammerhead sharks are sort of like the black sheep of the shark family. They have a strangely shaped head that looks more adept at pounding nails than at inspiring fear in the oceans! But, truthfully, that’s why we like hammerhead sharks. They’re not out there trying to steal all of the glory. They’re not trying to cut big movie deals. They’re just swimming around in the ocean doing their own thing and they never worry about whether or not they’re as mainstream as a great white shark. In fact, they seem to be proud of their slightly odd appearance!

Become the slightly off-beat shark with this hammerhead shark costume! You see, our costume designers aren’t afraid to be a little outside of the mainstream, which is why they crafted this delightful costume. It's a large gray jumpsuit that has a white front. The suit has a zipper in the front, making it easy to put on and take off. Your face fits inside the “mouth”, which has a row of felt teeth on the top and bottom. The top has the iconic hammerhead shape, letting you fully assume the off-beat look of the shark. The sleeves are designed to look like fins, but they have a small opening at the wrist for your hands. The final piece to this costume is the pair of shoe covers, which fit over any pair of shoes to make your feet look like shark fins!

If you’re tired of the great white shark getting all of the attention, or you just want an out-of-the-ordinary costume, then this hammerhead shark costume is for you! Show them all who the new shark in town is.