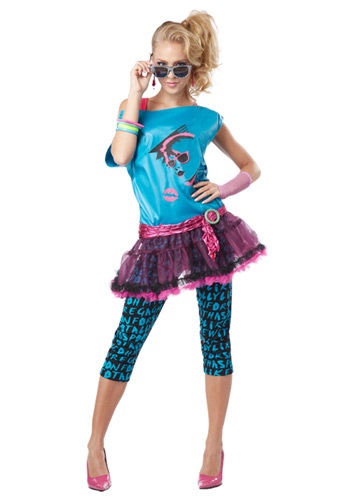 You didn't necessarily want to be called a "valley girl" in the 1980s because that probably meant you came off a bit ditzy. But before that, it was common for the stereotyped term to be applied to any upper middle class girl in the Los Angeles and surrounding commuter areas that followed the fashions of the day. This was a branding that tried to capture the attitudes of that time, namely of materialism, consumption, and New Wave style.

By 1983, the valley girl look was immortalized with a movie of the same name, and this fad really held strong in music and popular culture until its culmination in a movie called Clueless. Shopping at the mall, freaking out about boys, and tanning were all a part of this lifestyle, and slowly began to fade away with the end of the 90s. Slowly a life of boredom and indifference would replace the materialism of the valley girl. But we still remember them today in many ways, including with this Adult Valley Girl Costume.

This costume is 100% polyester with a turquoise top with attached black and pink tulle skirt. There is black and pink pop art printed on the front. The black leggings have turquoise lettering on them. It also comes with a shiny pink scrunchy belt with a green plastic buckle, and light pink fishnet glovette. Add a pair of pink heels to complete the retro costume.