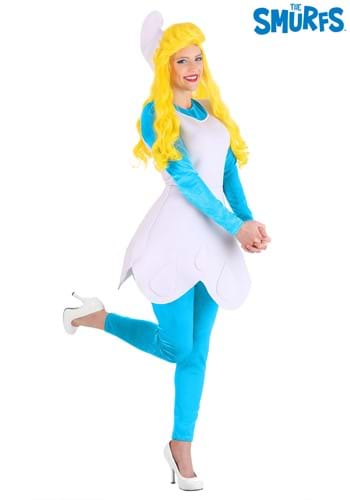 Depending on the version of the Smurfs that you look into, they've got their hands in some pretty significant sorcery. While he's more a tinkerer in the original comics, Papa Smurf (and Grandpa) know a thing or two about magic. (Frankly, Gargamel should probably pay attention to the two and learn a few things that weren't written in that old book of evil spells.) Chief among Papa's magic was taking Gargamel's creation and making her a real, living Smurfette!

Of course, we've been giving some serious thought to this lovely lass. While she was originally crafted of clay, a stone heart, and scraggly black hair, she was infused with so much positive magical energy that she became the most popular Smurf in the whole village. We have to wonder if there isn't a little more magic to her than meets the eye. Could Smurfette have become a sorceress in her own right!?

It's time to answer the question that's been plaguing us for decades and learn what magic Smurfette can truly work. You can help us out on this quest with this officially licensed Smurfette Costume. It's a white dress with a flower petal hemline and attached blue sleeves. The matching leggings complete the Smurfy color while the included white hat and the blonde, synthetic wig will give you the fine detail to truly bring Smurfette to life. All you need next is the twinkle of optimism in your own eyes and we have no doubt the magic will start!

Papa Smurf keeps a lot of his real magic under his cap, so it's tough to know the full lengths of Smurf power. We're suspecting that you'll go even further than Papa ever could have in this Women's Smurfette Costume. Be sure to post your look online to inspire future Smurfing generations!