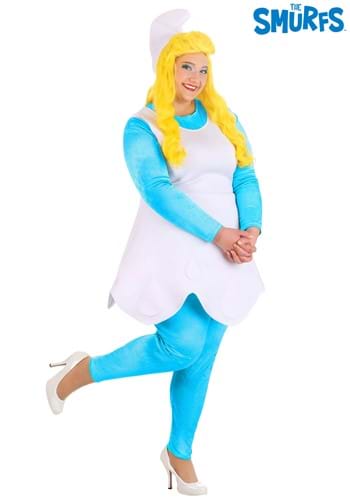 For generations, the Smurfs had lived in their village and in other magical locations throughout the natural world, seemingly all on their own without a female Smurf in sight! Now, that's something that has always confused us a bit. We know that new Smurfs showed up in the village when they were delivered by the Stork, Feathers, once in a Blue Moon. (Also a boy Smurf, by the way.) But, even Papa Smurf never seemed to know where they came from!

Well, deep investigations have shown that there are other villages of Smurfs elsewhere. While it isn't always considered totally canonical, the Smurfy Grove is home to an entire village of Smurfettes! What's with the isolation, Feathers!? Fortunately for us, Gargamel had the idea for integration a long time ago (even if he had his evil reasons). Still, we've gotta thank the guy. Without his initial magic, we wouldn't have ever come to know how great Smurfette could be!

It is time to work some magic of your own and transform into the true star of the Smurf Village! Our in-house Made by Us design team has put together this officially licensed look of Smurfette so you can play out your own magical time. The costume includes a white dress with a flowery hemline and blue sleeves. Leggings give you the full blue look while the white hat completes your authentic Smurfette look! (No clay or stone heart required!)

While Papa and Grandpa Smurf are the only two who've really shown a knack for magic, we're pretty sure that Smurfette knows a thing or two as well! From her mysterious origins and clear command of the whole village, she's got something up her sleeves. Show that you can command the same power in this Smurfette costume!