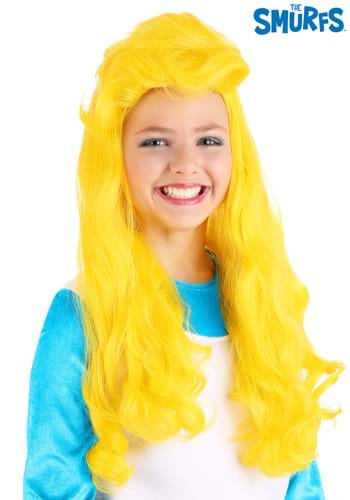 Like all of his plots, Gargamel totally failed when he came up with the plot to take over Smurf Village with his most clever of creations, Smurfette. If only he had sat back and considered what went wrong, he might have actually won and gotten all of those magical Smurfs all to himself. This plan was doomed to fail all because of the details.

He created a cute little Smurfette out of clay. He used the right amount of magic to bring her to life, too. She was clever and innovative, too. But, he went and gave her a hairstyle that pretty much copied his own! Scraggly black hair flying out of everywhere? C'mon, did he really think that would have worked to get the Smurfs excited to share a picnic or give up their important jobs around town?

It's a good thing that we've got Papa Smurf on our side, though we'd like to think we wouldn't have made the same mistake Gargamel did. Our in-house design team put their wizardry together to create this officially licensed Made by Us wig! It is bright yellow hair in a wavy style inspired by the luxurious locks of Smurfette, herself!

Gargamel might have won the day if only he had given Smurfette a lovely crown of golden hair. That would have tricked us all! Fortunately, he only had his wiry hair to use and Papa Smurf was there to make everything right! Complete your kiddo's look the same way with this blonde Smurfette Wig.