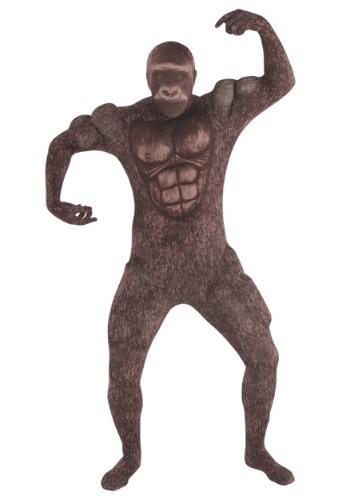 The whole gorilla species would like to make one thing perfectly clear: gorillas should be called the 'kings of the jungle,' not lions, and gorillas would like to take a moment to explain why. First of all, gorillas share 98% of their DNA with Homo sapiens, AKA humans and they're capable of doing a lot of the same things we are because they have thumbs too. (Ha ha lions, you don't have thumbs!) Gorillas also like to boast about their heights. They're the tallest primate, even beating us humans. Plus, gorillas are more civilized than lions and maybe even some humans out there. They are able to use tools and proudly consider themselves herbivores. That's right, gorillas don't eat any meat unless you count the occasional insect here and there. Lions, you can't say the same can you?

If you think gorillas should be given the title 'kings of the jungle' then support the whole species by wearing the gorilla Morphsuit. You'll look exactly like one of these powerful primates and if you happen to spot a lion while on your travels, be sure to show them who's boss.

The muscle gorilla Morphsuit is made from a spandex blend so it's very stretchy and will keep you covered from head to toe. The suit is designed to look like gorilla fur while the popping muscles on the chest, thighs, and arms give it a 3-D effect which is cool and muscular which is even cooler. The included mask stretches around the head giving you the usual gorilla features like dark eyes and a round snout. You'll be able to see and drink while wearing this mask.

Gather up all your friends, wear these Morphsuits, then head out on the town for some monkey business!