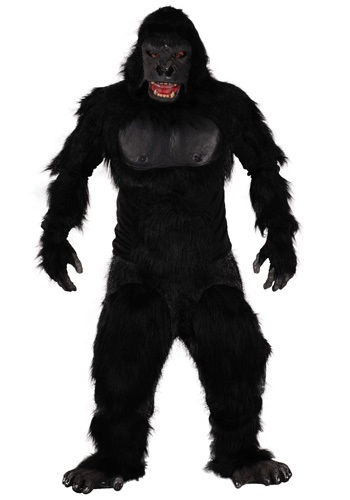 Are you ready to go bananas this Halloween! Normally, there is a no monkey-business policy in place most nights, but on Halloween monkeying around is encouraged! Be more than just another howling monkey this Halloween. Become a king among primates with this Two Bit Roar Gorilla Costume!

So, real quick, we just want to be perfectly clear, right off the bat. If you wear this gorilla costume, there is definitely a pretty good chance that animal control will show up at the party, they will be carrying tranquilizer guns, and they will, in fact, attempt to return you to the zoo. Trust us. We know from personal experience, and, let us tell you, those darts… they knock you out cold in a flash. You'll probably wake up sometime the next morning thinking it was all some sort of zany dream. Now, don't be alarmed but you will probably wake up inside a gorilla exhibit. Just do your best to blend in until you get a chance to talk to the zookeepers. The anecdote about how you ended up in the zoo will be a pretty awesome story to tell your friends, so we’d say it's totally worth it!

Toss on this awesome Two Bit Roar Gorilla Costume and be the life of the party (until animal control shows up)! Grab a banana prop and let the hilarity begin with your goofy gorilla-antics. Make sure to practice up on those animalist behaviors. Sure, they’ll come in handy for a few laughs at the party but they will most definitely help you hold your own inside a gorilla enclosure!